Jason Keenan is travelling to Windsor Park for the Irish Junior Cup final for the third year in a row, though Monday’s trip promises to be very different.
Having watched Harryville Homers and Enniskillen Rangers claim the biggest prize in Northern Ireland junior football from those famous stands in 2016 and 2017 respectively, Keenan now takes centre stage.
The Enniskillen man linked up with childhood club Rangers in the wake of last year’s cup triumph and this May Day will spearhead the defending champions’ attack having blazed a trail through the Fermanagh and Western with 24 goals in all competitions to date.
“I’ve actually been up to the last two or three finals at Windsor Park,” said 28-year-old Keenan who was playing for the now defunct Enniskillen Santos during that time. “We went up last year, me and my brother [Christopher] to watch Rangers and the year before just to see what it’s like. I really thought it would be great to be out there and now I will be.”
Ahead of what he acknowledges is the biggest game of his career by some distance, Keenan is as measured off the pitch as on and won’t stray too far from the message of his player manager and cousin Michael Kerr.
“We still have to take it a game at a time really, you could get injured or you never know what could happen. We have a couple of big league games and you can’t think too far ahead. We will take each game as it comes and then turn our attention to the Junior Cup final.”
Recent defeats to Enniskillen Town and Strathroy Harps have took some of the wind out of the sails of the Aughaward Road club, but Keenan and Rangers will now try to use that to their advantage.
“That kind of woke us up more than anything. We were on a high really from the Harryville semi-final going into the Mulhern game [against Enniskillen Town]. We didn’t think we were going to win it easy or anything but we were just gliding into it and they deserved to win. We have to learn from that.”
Those words could just as easily have came from the mouth of boss Kerr, who managed his team to a Junior Cup final rout 12 months ago against Hill Street of Lurgan. Rather than resting on those laurels, the player manager set about improving his squad further and that’s where Keenan came in after Santos fell by the wayside.
“He [Kerr] was the main reason I signed really. He was talking to me about it over the summer and said he knew I would score goals with this team. It has been a team effort though, there are men here who put it on a plate for you,” said Keenan, who did play a couple of underage games with older cousin Kerr at Ballinamallard.
“I’ve 24 goals now, counting Kennedy cup. I was six or seven games without a goal there so there was bit of pressure alright.
“Michael is very good, he is very constructive when he’s talking. It keeps you going, he’d pull you to one side and say to just keep up the hard work on and off the ball even if you don’t get a goal and it’s all about the team. He said the goals will come and they have,” added Keenan who ended his brief scoring drought against Beragh Swifts last week.
“I wasn’t expecting to score as many as I did at the start of the season and then you’re maybe expected to keep going, but it was good to score again.”
Keenan could complete a special father and son double against Greenisland on Monday with his father Joe having reached the promised land in junior football with Rangers back in 1999, their only ever Junior Cup win prior to last year.
A Fermanagh and Western second division winner’s medal is all Keenan can set against his father’s incredible haul, for now.
The F&W Player of the Century is the most decorated player in the history of the local game with six league titles, seven Mulhern Cups and that famous Irish Junior Cup.
With his two sons Jason and Christopher now in the Rangers squad, he hasn’t missed a game all year and will be a proud man in the stands at Windsor Park this Monday no matter how the game goes.
“He would actually give you a bit of stick from the sideline if you were not doing what you were supposed to be doing,” laughed Keenan. “You would hear him. He might say an odd thing after a game, but not much. He has watched every game I think this year.”
Rangers flourished on three fronts until their recent Mulhern exit at the hands of neighbours Town and the secret to their success is simple hard work says Keenan as they continue to compete for a league and cup double.
“There’s been a big difference this season to anything I’ve been involved with before, the level of player and the commitment from players just. Training has been hard since pre-season, boys are really putting it in. You have Tony Roofe, Michael and Stephen McFrederick taking training. We are working hard a few nights a week if we don’t have games and deserve to be where we are now,” said the sharp-shooter.
“It’s just a different level altogether, the attention to detail here. Now we have to go with game plan and push on after a good season so far and win the double.” 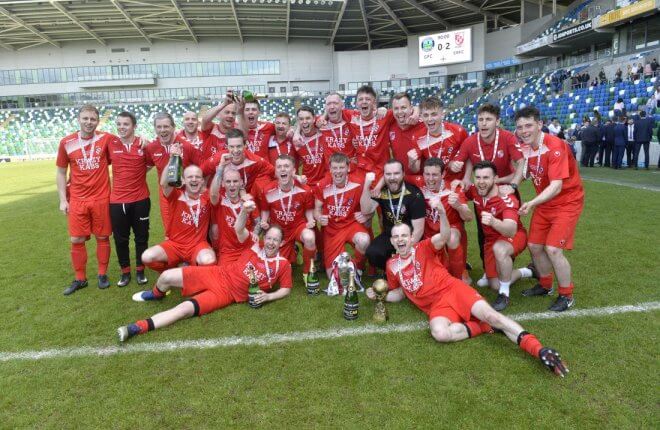 Keenan’s brace has Rangers in dreamland 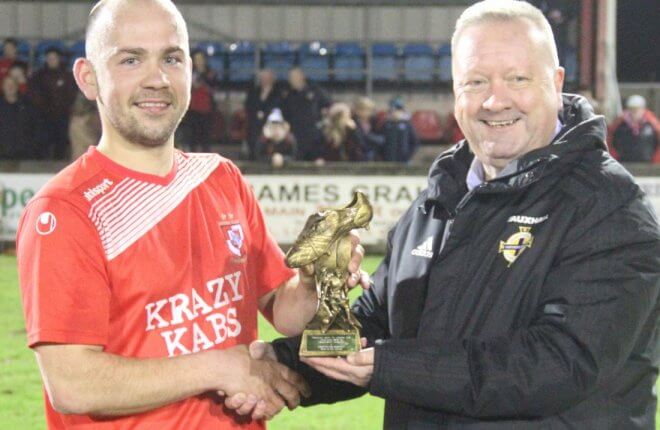