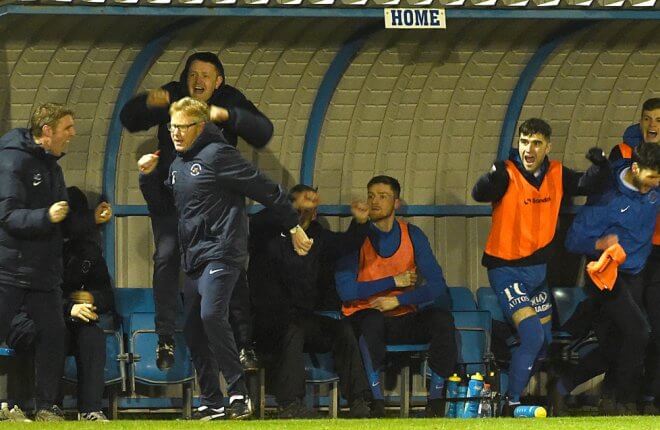 Ballinamallard United had a short breathing space this weekend before starting their five game run-in for Premiership survival tomorrow (Tuesday).
The Ferney Park club has three games at home and two away in the final five and they start on Easter Tuesday night with a home game against Carrick Rangers, who sit five points ahead of them.
Manager Harry McConkey said: “Without a question of a doubt it could be classed as a do or die. But football is crazy and the points you pick up are sometimes the ones you least expect.
“We’ve had three really good sessions against Glenavon, LInfield and Ballymena and we have a week’s rest now. The games have been great testers for the players and valuable for me. I’ve looked at the character of the players and their playing strengths. So now have to put that in a pot and we’re going to have an active recovery session on Tuesday night and a training night on Thursday and get together for a good session on Saturday.
“We’ll be trying to focus mostly on ourselves, but we’ll have a detailed rundown on Carrick. So the focus will be firmly there.”
Several players are on the treatment table this week and striker Josh McIlwaine will miss the Carrick game with suspension after his red card on Saturday.
“That’s unfortunate because O’Flynn gives us a lot, but then it lovely to have something else to change the dynamics of the game and to cause another problem for defences.
“There is no doubt the next five games are vital to this club. There are 15 points to play for and the only way to approach this, I do believe, is that you exhaust yourself with each one at a time.
“We put everything into it because one will dictate where you are going for the next. The mood that you go into the next game is vital, so it is very important that you keep that focus for the next game.
“We’ve done that, but when you have players travelling a long distance and their preparation is simply isn’t the same. We clearly didn’t concentrate enough in those early stages against Ballymena.”