Advertisement
HomeHeadline50 years on, old Techies are rolling back the years!
Advertisement 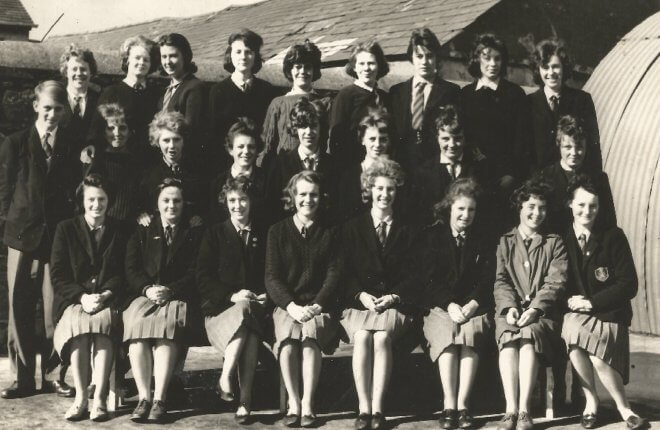 IF YOU you were an old ‘Techie’ then this Saturday evening could be a big night for you.
Enniskillen Technical College celebrates 50 years with a reunion party at Enniskillen Golf Club on Saturday evening, December 16th.
Old friends Jean Harron and Dave Morgan, former students themselves in the late 1960s, have got together a group to help organise the night.
Jean explained, “We were chatting one night and chatting about old schools. We both found out that we had been at the original Tech.
“Dave said, what about having a reunion and it all started from there. Since that night, four months ago, we’ve got together a small committee and been trying to track down former students and teachers from the early days of the college.
“We’re absolutely delighted with the response and to date we have almost 100 attending at the Golf Club,” she explained.
Shortly after the college opened its doors on the site of the existing and beside Enniskillen Gaol it advertised evening classes in the Fermanagh Herald.
“Enrolment for part-time and futher education evening classes” with enrolment for all classes taking place in centres all around the county.”
Its principal was David Hanna who developed the original college and helped in the development of the new college, which still stands today on the same site.
Jean recalls, “They were great days then. Indeed they were some of the best days of my life. We had to wear a full uniform in those days with blue shirt, tie and grey skirts. It also included a navy blazer with the college crest and a blue and yellow scarf, although when the new college came along they were done away with except for the scarf.
“I remember we had students from all over the county there in the original building and so good were the numbers that we had to sit in many classes out the back in the old Nissen huts,” she recalled. “They had little round boiler fires in them for heat, but if you got too close you could easily get your clothes burned.
“Then there were the classrooms above the gym too. That area proved a great place to hide if you didn’t fancy going to class,” she joked. “We had people like Pamela Murray, Daphne Fleming, Ann Hall, Des Crudden, Walter Burke and Marita Fallis with us then and I think every one of them enjoyed their time there.
“Of course it had a lot to do with the teachers too. People like John Maxwell, Doreen Frazer, Irene Campbell, Pat Concannon and Albert Sheridan. I think they made it the place it was,” she said.
Now the first reunion takes place on Saturday where the former students hope to meet and chat around 6pm before supper is served at 8pm.
To round it off there is dancing from 10pm with music by Ally Harron and Marian Curry.