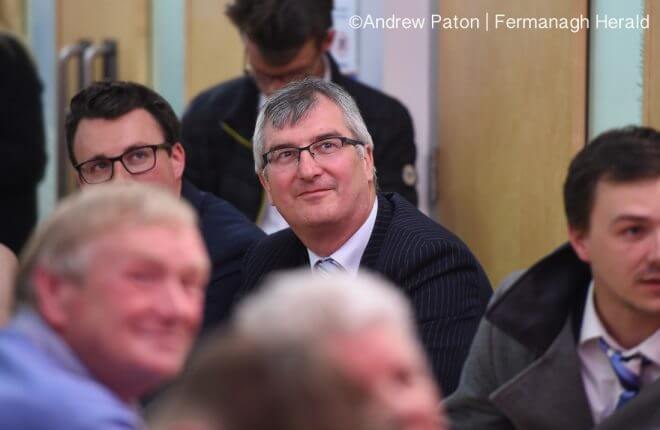 Tom Elliott and supporters at the count in Omagh

IN the early hours of last Friday morning, Tom Elliott’s brief stint as Fermanagh South Tyrone’s MP came to a sudden but not entirely unexpected end as bookies favourite Michelle Gildernew triumphed for Sinn Fein.
The crushing yet narrow defeat was a far cry from the jubilant scenes of May 2015 when the UUP man defeated Ms Gildernew and brought down her party’s 14 year hold on the Westminster seat. This time it was the Tyrone woman who managed to overturn the Ballinamallard man’s 530 vote victory of two years ago to win by 875

One week on Mr Elliott says he won’t be disappearing from public life despite losing his seat. The former MP was speaking to the Herald as he reflects on his political future with family and supporters.

The father-of-two says he is not someone who dwells on things: “I always knew that if it came down to a numbers game that it was going to be difficult. I was hoping that my positive message and representation would have been a factor. We ran a positive campaign but in the end I always manage expectations and have to be realistic.”
The ex-UUP leader wasn’t giving much away when asked about his future plans.
“In the short-term, I have plenty to be getting on with at the moment given my involvement in a number of organisations which I will carry on doing. I’ll still be about but this puts a different perspective on things so you just have to adjust. Obviously it’s a massive change after a life in politics for a long time but life changes.”
Despite a rumoured move to the DUP, Mr Elliott said he had “no reason” to jump ship to another political party.
“I have always said that if I’m not in politics, I’ll do something else. I’m realistic enough to know that politics can be as unpredictable a profession as farming.”
After just two years as an MP, Mr Elliott was naturally hoping for a longer tenure but is grateful for the opportunity to have been Fermanagh South Tyrone’s voice at Westminster.
“I was only getting into the swing of things but I feel that I achieved a lot in my time although it just wasn’t enough to convince people. It was an honourable experience and I did it in the best way possible. It’s a time that I will always cherish and remember and I thank the people for putting me there,” he added.