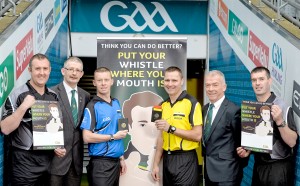 GAA President, Liam O’Neill launched a new Recruitment Campaign aimed at bolstering the number of volunteers involved in refereeing at all levels of the Association.

The Think You Can Do Better?” campaign will involve inter-county referees acting as Recruitment Ambassadors in their own counties.

The aim of the campaign is to increase the number of referees officiating at club games throughout the country and consequently, pushing on to Provincial and National level over the next few years.

As part of the campaign the GAA has produced a recruitment video, poster for distribution to clubs as well as an advert which can be used in Allianz League and pre-season provincial competition programmes.

Uachtarán, Liam Ó Néill said, “I am delighted to launch the Referee Recruitment campaign today and thank the National Referee’s Committee for their efforts in this regard.

It is fair to say that there is an ongoing requirement for new referees in our counties and this campaign should see an immediate swelling of referee numbers. I look forward to seeing the fruits of these labours as young referees progress through the ranks to eventually take charge of games on the biggest stage.”

Chairman of Coiste na Réiteoirí, Pat McEnaney said, “Already a number of counties have plans in place for attracting new referees.
The resources we are providing should assist in their drive to increase refereeing numbers.

Our new recruits can look forward to a revitalised Club Referee Training Course in February and March next and, with ongoing training and mentoring thereafter we are confident that a considerable number will come through the system and, hopefully, progress to the highest level of our games.”

A pilot project is planned whereby four former players (Two hurling/two football) will train as club referees in their counties.

They will receive enhanced support, with the ultimate aim, based on their progress, of developing the individuals to inter-county standard.

Counties will be asked to nominate retired players for inclusion on this project, and selection will be made from these nominees, to commence their training in February next.

From the commencement of the Allianz League inter-county referees will be sporting new gear, which was also launched at the Croke Park event. More details on the initiative are available on www.gaa.ie/referee.