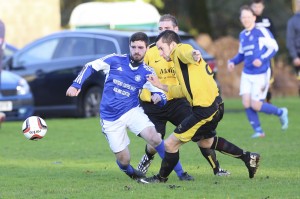 Enniskillen Athletic got themselves back on track with consecutive wins as they travelled to Lisnarick and returned winners by three goals to one.

It was a third meeting between these two sides already this term, both having one win each prior to Saturday’s contest, Athletic now edging the head to head as they jumped into third place in the Division 2 table, Lisnarick though remain in the bottom two.

The visitors were out of the blocks quickly and within five minutes John Joe Strain had a great opportunity to give Athletic the lead when put through one on one, but the attacker couldn’t convert the chance.

Once again Christopher Curry was the architect of most of his side’s best work and on 19 minutes a mazy left wing run saw him evade a number of challenges before firing a shot across goal into the far bottom corner.

On the half hour Dermot Lewsley had a good chance to add another but Lisnarick snuffed out the opening and the hosts began to come into the game more as the half ended 1-0 to Athletic.

Lisnarick though began the half well as they piled pressure on the Athletic defence which stood firm until the 62nd minute when the hosts levelled matters.

Athletic however restored their advantage moments later, Daniel Goan heading a corner back across goal for Niall McCusker to volley in from eight yards.

Bryan Owens was then be sent off by referee Joshua Porter for over-celebrating the goal meaning Athletic were forced to play the remaining 20 minutes with just ten men.

Christopher Curry however would take centre stage once more, a number of mazy runs yielded opportunities for himself and his team mates before they would eventually secure the victory.

Another trademark run from Curry saw him pick out John Joe Strain who confidently fired into the net for 3-1.