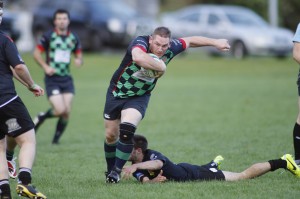 Ballymena Seconds advanced to the next round of the Junior Cup after a four point victory at the Cran.

In a match played in unseasonably mild conditions a blustery wind was also to have a significant factor in the match.

The distinguishing feature of the first quarter was the referee’s whistle and a series of blow-ups for knock ons and forward passes as both sides struggled with the wind with play concentrated in the middle third of the pitch.

Valley took a ball against the head at scrum-time and a good run from Sharkey, in at number eight for the unavailable Ryan Wilson, saw Primrose in support for the home team to threaten the Ballymena 22 on 23 minutes.

A series of attacks were repelled by Ballymena until the referee signalled an infringement against the visitors on 25 minutes. Armstrong, deputising for the unavailable Holme at out half, missed the difficult penalty.

Valley tails were up and they started to put some edge into their attacks. A series of plays between backs and forwards in the Ballymena 22 saw Best eventually switch the direction of the attack to the short side. Treanor, Armstrong and Sharkey made inroads towards the visitors’ line before Clarke was on hand to score his second try in two games in a Clogher Valley jersey on 29 minutes. A tricky conversion was missed and Clarke had to leave the pitch shortly after through injury.

As half time approached an excellent touch-finder from Armstrong put Valley deep into Ballymena territory. A good line-out take by Sharkey was driven on by a Valley pack and Cobane made the decisive dive for the home team’s second try. A conversion by Armstrong gave Valley a 12-0 lead on half-time.

The second half started brightly for the away team and Small kicked an excellent penalty from just inside the Valley half on 43 minutes to leave the score at 12-3. Two minutes later Ballymena were awarded another penalty from the same range and Small struck again to reduce the deficit to 12-6.

This was a the start of a good spell of the match for Ballymena and, coupled with the increasingly influence of the referee, the visitors scored  20 further unanswered points in the third quarter.

First Sharkey was yellow carded on 50 minutes. Two minutes later Falconer was also sent to the sin bin to reduce the Valley team to 13 men. The resulting penalty kicked by Small reduced the deficit to 12-9. With Valley on the back foot and Ballymena in the ascendancy a further penalty by Small drew the teams level on 57 minutes.

With Sharkey and then Falconer restored Valley had to play catch up rugby.

With the clock running down Valley were guilty of bad decision-making after a poor clearance from the home team’s 22 gifted possession back to Ballymena. As the ball bounced into the Valley 22 it was Ballymena’s winger, Smith, who was on hand to score under the posts. Small added the extra to leave Ballymena leading 26-12 on 70 minutes.

The last ten minutes saw the Valley camped in the Ballymena 22. The Ballymena cause was not helped when the referee produced a further yellow card on 73 minutes. Good interplay by the Valley backs and forwards created the space for Dunlop, playing out of position at full back, to score a try on 76 minutes.