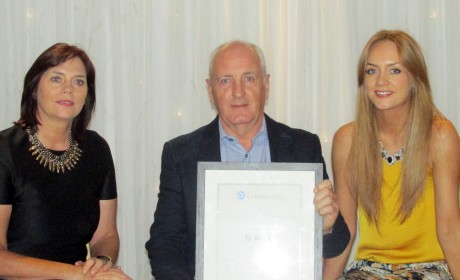 THE Clarion Hotel Sligo was the venue recently for the Bardic awards ceremony.

Comhaltas honours a number of significant performers from the traditional music world at Fleadh Cheoil na hÉireann every year.

This year eight people received these prestigious awards with Fermanagh man Pat McCabe one of those who received an award on the night.

Seamus McCormack, Uachtaran Comhaltas Ceoilteoiri Eireann who was MC for the night said, ”Pat had been teaching for over 40 years and has taught many prominent musicians of our time including The Rooney Family, Brian Mc Grath, The McCague Family, Martin Donahoue, Brid Harper and many many more.

“He has won Junior and Senior All Irelands in the Piano and Piano Accordion.

“In the mid 70s while a member of Aileach he toured extensively Ireland, Europe and America and was one of the first ever traditional music groups that appeared on ‘The Late Late Show’ and ‘The Embankment’.

“Pat at present is a very active musican and teacher in schools and Comhaltas branches in Cavan, Monaghan and Fermanagh.

“His simplistic approach to teaching and music appeals to both young and not so young and I am told he is a great listener also.”

Pat spoke very briefly afterwards and thanked Comhaltas for this great honour, music and teaching has brought great enjoyment to his life.

All his students young and old have stayed in touch with and supported him over the years and that for him was the highlight of his time teaching.

Pat was also joined for the cermony by his wife Rosita and his daughter Aisling, also some of the Martin McCabe branch were in the audience along with Pauline Rooney (Chair of Monaghan County Board) and Mackey Rooney, Edel Connolly Morrison and Katie Boyle