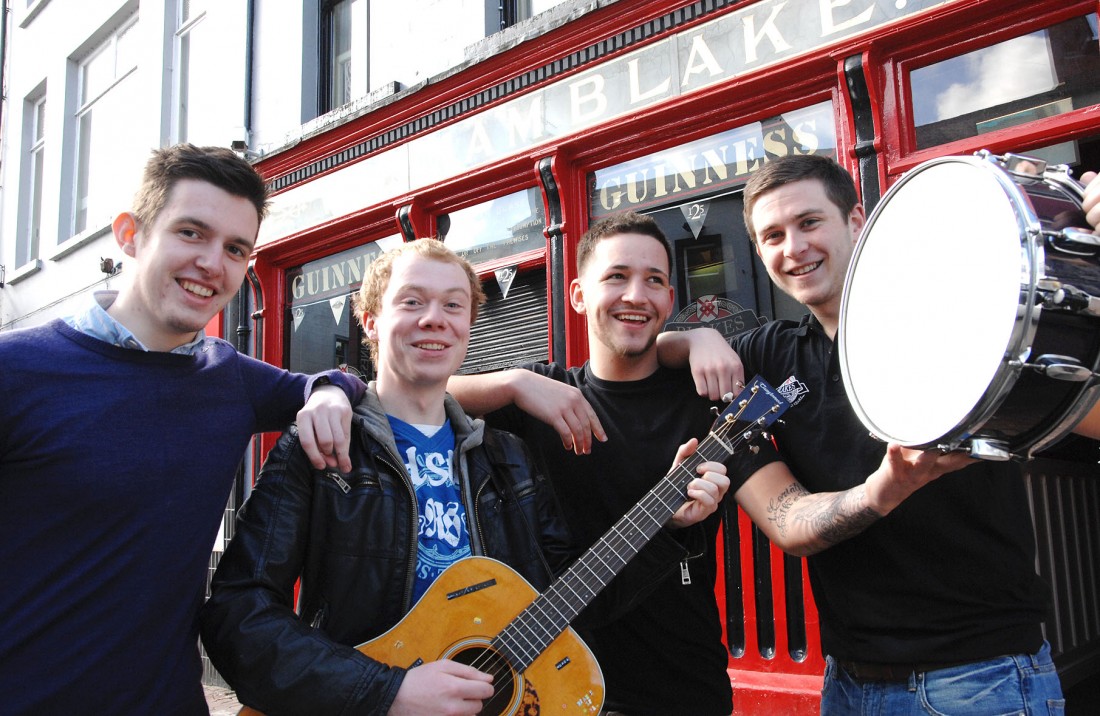 SINGING FOR SAM…Fermanagh Herald journalist Ryan Smith (left), is joined by local musicians, Darren Smyth, and Joel Johnson, as well as Blake’s of the Hollow staff member, Padraig Lunny. The two musicians are members of two of ten acts who will perform across three stages in Blake’s of the Hollow on May 25 in aid of the Sam Bradley Care Fund

Dozens of musicians are gathering this Saturday night in aid of the Sam Bradley Care Fund, and, our music junkie, Ryan Smith, predicts a top night in Blake’s of the Hollow…

I’VE LONG been an advocate of live music in this town.

I remember when I first attended Rock The Lough a couple of years back.

A band played a cover of ‘Whiskey in the Jar’ – the singer was drenched in sweat, he’d lost his top somewhere between the floor and the stage – and there I was quite near the front.

Sweat had begun to drip off me too, but just not in the same vein.

And this Saturday night, we’re hoping for something that bit special.

Sam Bradley, from Belnaleck, a son of our Sports Editor, Colm Bradley, and his wife, Michelle, was diagnosed with a rare and harsh cancer called ‘Neuroblastoma’ back in January.

It came as a shock to everyone, and the response from the community has been huge.

The Bradleys began a fund-raising appeal for Sam – as he may have to travel abroad for treatment.

And at the Fermanagh Herald we began to put our heads together to see what we could come up with.

Around that time I was approached by Padraig Lunny, a staff member at Blake’s of the Hollow.

And our ideas were one in the same: a live music night.

We’ve pulled together nine bands and solo acts from Enniskillen and beyond – as well as a selection of All-Ireland Fleadh winners.

And not surprisingly, they were all happy to be of service. We think that we’ve got something that will appeal to everyone.

From acoustic acts Roisin and Felina Burns, Darren Smyth, and Aaron Wilson; to electric acts like Judas, Wasted Grace and the DMs. And thrown in for good measure, we’ve Captain Casey, Indigo Fury and the return of local ‘punks’ Momma’s Slippers.

They’ll be performing across two stages in Blake’s of the Hollow, in the Atrium Bar and Level 7. Entry is £5 which includes the two stages – and all goes toward the Sam Bradley Care Fund.

Downstairs, in ‘the Hollow’ bar, a trad session from a selection of All-Ireland Fleadh winners will be free of charge, with donations buckets available.

We hope to see you there.