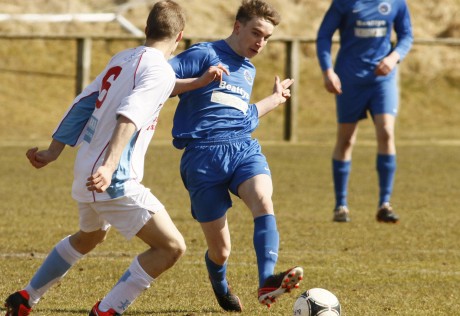 Ballinamallard Youth line up for another blue ribband cup final on Friday evening.

This time it is the Harry Cavan Cup final against Linfield at Stangmore Park, Dungannon at 7.30pm.

The young Mallard boys have been flying high for most of the season, sitting top of the Irish Youth League.

However, Linfield are the biggest threat and favourites to take the league title five points behind, but with four games in hand.

Ironically, Friday evening’s final will the first head to head between the two top sides in the country this season.

They haven’t faced each other in the league yet and have to play each other twice before the title is decided.

Since losing their opening game of the season away to  Donegal Celtic, the Fisher Park side haven’t looked back, going on an unbeaten run right up until January.

Linfield are unbeaten all season, winning nine and drawing two of their league games.

Balliinamallard’s good season follows on from last year when the under-18s won the League Cup and finished runners-up in the Northern Ireland Youth League.

This year the side has played 16 games, winning 10, drawing four and losing just two.

Players in the 18s have progressed really well this season, according to manager Ray Sanderson.

“It’s great to see some of these talented young players progressing. This season already two, Gary Phair and Johnny Courtney, have made their debuts for the first team, while several others, Gareth Carruthers, Josh McIlwaine, Jason Cluff and Adam Wallace have played with the Reserve side.

“Add to that McIlwaine and Courtney are both in the Northern Ireland Schoolboy Squad for the Centenary Shield.”

Linfield, too, though, have seen players progress with three in the first team squad which played at Ferney Park just last Saturday.

“It shows there is very little between the two sides. We’ve both been going well in the league, but Friday night will be completely different.

“We know it will be about our performance on the night. If we can play the way we know we can then we have every chance.

“Linfield are a good side and have some talented players from all over the country. But it’s down to us on the night.

“I know the players are up for it and they have the ability to do it.”