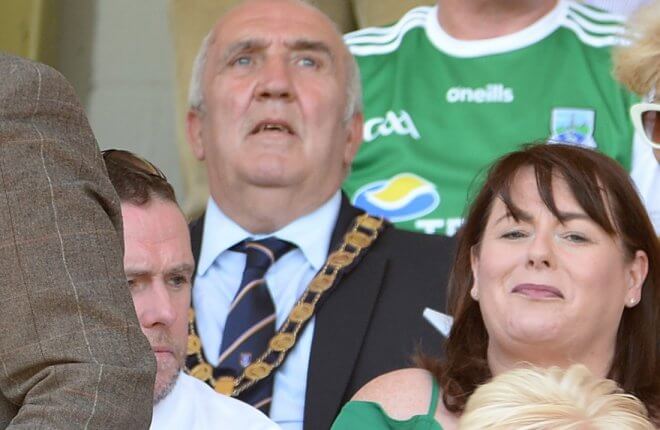 AT THE GAME: UUP Councillor Howard Thornton at Clones.

WHILE Arlene Foster’s gesture towards the GAA in attending Sunday’s Ulster Final in Clones was widely welcomed, her fellow unionist MLA in Fermanagh South Tyrone has been criticised for what she described as “latent intimidation” over the GAA team’s progress in the Ulster Championships.
On Saturday evening, the UUP’s Rosemary Barton said the prospect of a Fermanagh victory had led to some feeling under pressure and “deeply uncomfortable” when the subject was raised in the workplace with them not reporting the matter for “fear of reprisals”.
“I’m disappointed to have been told by some people in Fermanagh that they are being subject to latent intimidation by the County GAA team supporters,” she said in a statement.
Mrs Barton had asked passionate GAA supporters to “respect their friends and work colleagues” as they may not have the same interest in the organisation and “their actions can leave their work colleagues feeling apprehensive”.
However her remarks were widely condemned on social media with some accusing her of “a lack of grace” and trying to “dampen the excitement”. Other unionists pointed out that they were in fact going to be “cheering the boys on regardless” and another tweeted: “I’m comfortable enough with my own identity to be able to be happy to support my fellow county men.”
Responding to Mrs Barton’s statement, the Alliance Party leader Naomi Long tweeted: “I find it so sad that this is what we’re reduced to. Can we not just enjoy things? Does it always have to be so divisive.”
Fermanagh’s former unionist MP Tom Elliott said recently that attending a GAA match is still very much off the agenda for him. Even though his fellow county men were eyeing up an Ulster title, Mr Elliott still hadn’t changed his mind last week.
“From a team perspective I would wish them well as I would know many of the players but unfortunately the GAA ethos and culture isn’t just about their sport. I think that is reflected within their rules which are skewed very much towards strong Irish nationalism,” he said.
Despite his views his successor as party leader Robin Swann tweeted his best wishes to Fermanagh GAA ahead of their big game. And as Arlene Foster sat in St Tiernach’s Park on Sunday, also seated nearby was the Ulster Unionist Party’s chairman of Fermanagh and Omagh District Council, Cllr Howard Thornton.