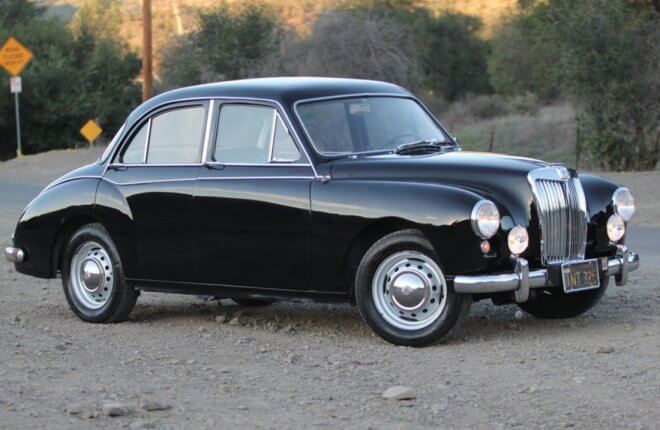 A 1958 Magnette, similar to the one driven by Mr and Mrs Quigley

A RETIRED teacher crashed into a couple driving a vintage car on the Loughshore Road last summer.
Victor McBreen (74) of Taghart, Shercock, Co Cavan, appeared at Enniskillen Magistrates Court on Monday having previously pleaded guilty to careless driving causing grievous bodily injury.
At approximately 12 noon on Sunday, June 18th police were called to a crash on the Loughshore Road between McBreen’s car and a 1958 MG Magnette belonging to Sean and Pauline Quigley.
McBreen’s car had collided with the Quigleys’ car as he came around a bend, and witnesses said his car had crossed the central white line. The defendant, a retired teacher with no previous convictions, claimed the accident happened on his side of the road.
The husband and wife suffered multiple injuries. Mr Quigley’s injuries included a punctured lung, five broken ribs, 14 fractures to his femur, and multiple lacerations.
Mrs Quigley’s included two fractures to her upper arm, a fractured knee, and multiple lacerations. Mr Quigley spent several weeks in hospital, and the court was told, as of August last year which was the last update available to the court, he still required 24 hour care.
Defence barrister Gavin Cairns handed in references for McBreen from his local parish priest and a former colleague, and said he’d had an exemplary career as a teacher.
Mr Cairns said the speed of the crash was estimated as being around 40-45mph on a 60mph road, and was the result of “a momentary lapse.” He said the couple’s injuries were the only aggravating feature of the case.
The barrister said it was unfortunate the Quigleys had been travelling in car from 1958, which he said had “simply crumbled” and was why their injuries had been so severe.
District Judge Bonita Boyd said the case required a pre-sentence report and adjourned sentencing until April 30th.