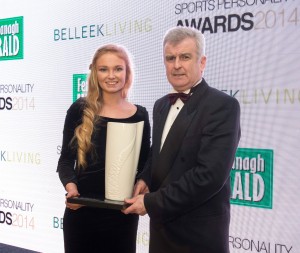 Kathryn Dane does everything to a high level playing rugby, soccer, hockey and golf.

During last summer she played for the Irish Sevens rugby squad in the European Championships in Sweden. After that she was chosen for the Ulster senior ladies. She also helped her school, the Collegiate win the Ulster Schools tag championship and an Ulster title with Enniskillen Ladies. In soccer she played midfield for the successful Fermanagh Mallards who gained promotion and won the Division Three NIWFA Concentrix Cup as well as representing Northern Ireland at the UEFA Elite Championships.

Despite such a breadth of sporting excellence, Dane was humbled to receive the Fermanagh Herald Young Sports Person of the Year award.

“It’s such an honour and privilege to get this award because there’s been so many really deserving people. I just feel honoured to get it,” said Dane.

“I think that people in individual sports such as swimming or tennis require so much motivation that I wouldn’t have unless I had the team around me. So this could go to any member of the team.

“Obviously representing Ireland in under 18 Sevens competition in Sweden has been an absolute thrill – after months of training it is so rewarding. As well as representing Northern Ireland in Latvia has been a surreal experience. I can’t thank people enough for giving me the opportunity.”

When it come to picking a favoured code, Dane is going to let that particular decision run a little longer.

“I couldn’t tell you where my loyalties lie! But through my father and the rugby club I’d edge towards that. But no, each thing has their highs and lows and I treasure each of them.

Dane is a sportswoman with a bright future ahead of her and the ambition get the maximum from her talents.

“I’d like to study medicine at university and hopefully stay at home maybe at Queen’s or down south and continue my rugby and football – and perhaps try and progress there,” said Dane.