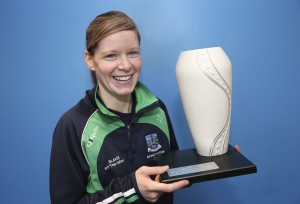 Was a time when Fermanagh ladies sides might have been known for their soft underbelly.

That blunt caricature was laid to rest in the All-Ireland quarter-final this year when Caroline Little battled through the second half with her face bandaged to drive Fermanagh to a 3-10 to 1-11 against title fancies Waterford. It might have looked dramatic, but Little plays down her physical courage. For the Lisnaskea lady the result was everything.

“I went for a ball and I banged into another player and got my nose busted open. I needed stitches, but I just got bandaged up and played on in the second half and got stitched after.

“The Waterford game was definitely the big lifter that we needed. Waterford are always there or there abouts every year and it’s always a point either way when we play them. It was a big lift because they were tipped to win it this year. It was a tight match and in tight matches we used to fall apart or crumble, but we got over those final steps.”

In playing through the pain barrier Little was conscious of laying down an example for the younger members of this fresh Fermanagh squad.
“I think it’s a good mix we have. There’s the few there who can lead the other ones on. Especially when the new ones come in and they don’t really know the commitment it takes to play county football. I think when they saw how much we gave up and how much we wanted to play it rubbed off on them.”

Another defining moment in Little’s season came with victory over Roscommon in the semi-final. Last season Fermanagh were denied at the last gasp. That wasn’t going to happen in 2014.

“The semi-final game was one we always wanted to get over after the previous year and getting beaten the last 40 seconds. When we went in at half time [against Roscommon] we realised we were letting it slip because in the last five, ten minutes of the first half they got a couple of goals and got back into it. Everyone knew we had to go to the end and not take our foot off the pedal. Even in the last ten seconds when we were well up everyone still wanted to defend and make sure Roscommon got nothing. Everyone had the heart and desire to get over the line.”

In the end Fermanagh had four goals to spare on the Rossies. What soft underbelly?

The final itself was anticlimactic, but Little believes the bitter experience will stand to the collective.

“The lead up to it was brilliant and although it didn’t got the way we wanted it was good for the younger ones to have experienced it. Now they know what success tastes like and maybe the drive will be there for them to go on and do it again. I know it was hard to take on the day, but it always makes you want more, when you get so close and just don’t get over the line.

Then in November Little received the ultimate accolade, the recognition of her peers as the best intermediate player of the year at the TG4 Ladies All-Star awards at the Citywest Hotel.

“It’s definitely a nice award to get and I was a bit shocked to get it to be honest. It lifted the year,” said Little.

“We’re back out training. We’re in division three and we’re playing teams that we will be playing in the championship so we’ll be playing competitive games right from the very start.

“We’d definitely like to give Ulster a rattle and maybe get to the later stages of the All-Ireland championship, hopefully we’ll be there or thereabouts.”