In the midst of her theatre tour, Ryan Smith, caught up with Lisa McHugh who plays at the Ardhowen Theatre at the end of the month… 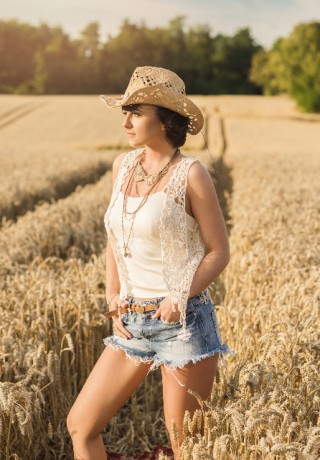 While the Glasgow native is to travel across the North – Omagh, Lisburn, Cookstown, Armagh – the final date takes place later this month at the Ardhowen Theatre.

Speaking at the end of last week, just a few hours after her first date on the tour at the Strule Arts Centre in Omagh, the 26-year-old was delighted with how the first show went.

“It went really well – it couldn’t have went any better to be honest,” she told the Fermanagh Herald.

“There was an awful lot of work that we’ve been putting into this tour for the last 12 months or more trying to make it as good a show that we possibly can – from the music, to the band and the production as well. There is a whole collection of things we had to work hard on and we were very nervous last night to get the first one done. But to be honest everything went to plan, which doesn’t always happen.”

Playing dance halls in recent years has been a heavy feature of Lisa’s movement through the ranks of the country music scene, but the theatre concert offers a fresh challenge.

“The production is completely different for the theatres. It’s a much bigger production, obviously we have bigger stages to work with and we have a bigger band there. On the music side of things there are an awful lot of songs that I’d like to do that I couldn’t at a dance.

“At the dance it’s all about if people can dance along to it, keeping the beat of the song and keeping the energy up. It’s not necessarily what you’re singing, it’s making sure they can dance. Whereas with the concerts, they’re coming along to hear you and we like to give them a completely different show that they haven’t seen before. To show a different side of me as an artist and to give them more – they’ve seen the dance and this is a different side to it.”

The audience for these shows can vary between both old and new fans: “But as long as we’re getting people through the door and they’re enjoying the show then that’ll be our main priority.”

On Thursday May 28, Lisa plays the Ardhowen Theatre – a venue she has sold out in the past.

“That one in particular – it’s only two minutes away from my house so the travelling is very handy,” she joked.

“The Ardhowen is always a fantastic theatre to play in. I’ve done it a few times in different shows over the last few years and we’ve managed to sell-out the venue and the atmosphere seems to be very warm. The people who come to the shows are always up for it.

“That’s our last concert of the tour and we’re looking forward to finishing it with a bang.”