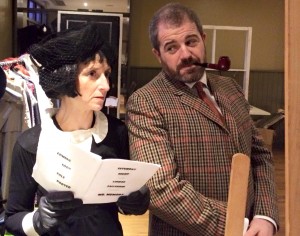 The 35th Enniskillen Drama Festival which opens in the Ardhowen on Friday 6th March promises to be one of the most interesting programmes put together by the organisers in recent years.

Of the nine productions presented by the competing teams six will be receiving their first viewing in the Ardhowen.

It is guaranteed a cracking start with Letterkenny Music & Drama Group making their debut at the Enniskillen Festival with Patrick Barlow’s award-winning adaptation of the John Buchan classic novel ‘The 39 Steps’. With just 4 actors playing

close to 100 parts in 100 minutes of fun and thrilling action the Donegal company took the play to All-Ireland success in the Confined Finals in 2012, winning 55 awards in some eight festivals.

Also making their first appearance at the festival are Glenamaddy Players from Galway. They bring ‘Stolen Child’ by Yvonne Quinn and Bairbre Ní Chaoimh to the Ardhowen stage for the first time having had the rare but enjoyable experience of the attendance of the joint authors at their first performance of the play in their home venue last weekend.

Cornmill Theatre Group were the surprise winners of the RTE All-Ireland Open Finals in Athlone last May with ‘The Devil’s Céilí’ by Philip Doherty. This season their award-winning producer Ronan Ward has selected Clones born Pat McCabe’s play ‘The Dead School’ as the vehicle he hopes to take them to back to back All-Ireland titles. They return to the Enniskillen Festival after an absence of a few years.

Also making their return are Lifford Players one of the most successful companies of the 70’s and 80’s.

They have chosen the Owen McCafferty play ‘The Absence of Women’. Ballyshannon Dramatic Society, Pomeroy Players and St Dympna’s Dramatic Society from Dromore also compete before the 35th Festival concludes with twice All-Ireland winners Estuary Players and the ever popular Holywood Players one of the oldest amateur drama groups in the country.