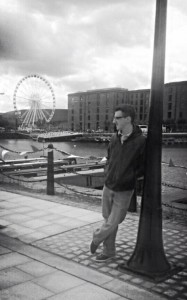 ENNISKILLEN-BORN theatre writer Brian Charity is taking his first full-length play to a Liverpool theatre in the coming weeks.

The former St Michael’s College student graduated from Queen’s University with a BA in English Literature and Language, and an MA in Creative Writing before being offered a place on the offered a place on the prestigious Young Writer’s Programme with the Liverpool Everyman and Playhouse Theatres and completed the programme in 2012.

Explaining his foray into theatre writing, Brian said he didn’t think there was ever a ‘eureka!’ moment.

“I dabbled with theatre at school but it wasn’t until I was at Queen’s that I started to meet other writers, directors, performers, and things started to fall into place,” he told the Fermanagh Herald.

“I initially started out writing sketches, which plays a significant part in Bobby and Twenk. My MA tutor, Tim Loane, played a big part in my writing, and encouraged me to pursue a career as a writer. It wasn’t until I moved to Liverpool that I started to take theatre more seriously.”

‘Bobby and Twenk’ is Brian’s first full-length play – but has had short plays and sketches performed before.

The tagline for the play reads: “Bobby and Twenk are detectives. A child has run away. ‘The Case of the Runaway Child’ – that’s what everyone’s calling it. With their careers and even their friendship on the line, can Bobby and Twenk find him before it’s too late – or at least before the end of the series?”

Brian explained: “The play is something a bit different. It’s almost like an old-style vaudeville, something I am a big fan of. We have made it like a television show, so we have adverts, theme songs, an old-fashioned announcer and even a little bit of audience participation! We want to have something that really stands out.

“The biggest challenge is finding the right people to work with. I have the finest group of performers, a great director and an opportunity to have my work performed at the lovely Lantern Theatre in Liverpool. Pairing that up with what I’ve seen in rehearsals, I think the audience are in for a real treat. Will I be nervous? Of course. But that’s a good thing… right?”

After the shows in Liverpool Brian said he would ‘love’ to take the play to the Edinburgh Fringe.

“From what we learn with this experience, and with the people we have, I think we could do pretty well at the Fringe. Long term I would love to have some work performed back home. It’s where I got the writing bug back in Queen’s, so it would be nice to come back with something special. I’m working on something a bit different again. I like trying to make theatre that people may not have seen before”