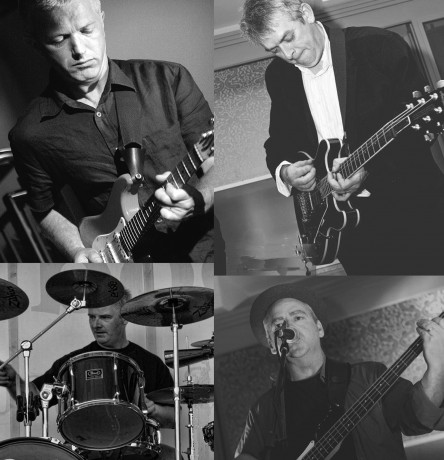 ‘BLUES music has not only stood the test of time, but is now as popular as it ever was’.

That is the view of local blues musician Maurice Collins, this week speaking about the blues scene in the county.

The Fermanagh-born musician noted that the roots of blues here stretches back to the showband era – as well as with the 1960s explosion of British blues bands into the mainstream.

Fleetwood Mac, Cream, and The Rolling Stones embedded the blues genre firmly into everyone’s record collection, as did Irish artists such as Rory Gallagher, Gary Moore and our very own Pat McManus.

“Personally, I am a relative newcomer to the rhythm and blues scene,” Maurice explained.

“My first foray into blues was spurred on by one Mr Edward Beattie (RIP). Ed was a real force of nature and a raw talent who played the blues-bend style harmonica.

“Ed quickly drafted me into The Coalition Blues Band who made their debut in a packed Railway Hotel at the inaugural Fermanagh Small Male Chicken Blues Club in 2011 alongside Gerry Donnelly and Sidewalk Boogie.”

And, in 2011, Maurice spoke of a real demand for live music in the area.

He described how the blues club provided an arena for musicians from across the country to perform.

“We are all indebted to Ed’s foresight and miss our friend deeply,” Maurice added.

“We always try to mix up the blues genre by fusing different styles of jazz, funk, reggae, ska and straightforward rock ‘n’ roll.

“Alternatively it can be an advantage to be classed within the ‘blues’ bracket. Indeed when we play there is little point in expecting us to play a Vanilla Ice, AC/DC or a Smokie song as we are just not that type of band!

“In many respects we always look forward to our rehearsals each week. Each member brings their own influences to the table – ranging from Albert Collins, Little Feat, to Big Boy Bloater. Cris, who has toured with The Trojans, Selector and Rico Rodriguez has penned a number of original songs which are now incorporated into our set along with a few great songs from Roni’s back catalogue.”

“We are very lucky have great bands like Midnight Graffiti, The Hand Me Downs, Judas, I’m Not Maggie and Shakedown playing regularly and there are many other talented musicians such as Luke Burns, Caimin O’Shea, Stephen Brennan, Paul Hopkins and Mark Whitely doing the rounds.

“Personally, it is great to see that the ‘older blues generation’ can still hold their own corner.

He concluded: “To me, the blues scene is not solely about the music, it is more to do with the relationships that spring up between the players from different bands and most importantly, the people who come and support us at each of our shows.”

Sidewalk Boogie return to Enniskillen in the Atrium Bar in Blakes of the Hollow on Saturday, March 8.