A LISNASKEA-BORN author could see her characters come to life on the silver screen – with the first draft of the screenplay currently being worked on.

That author is Julieanne Lynch, a full-time writer, and former pupil of St Comhghall’s in Lisnaskea, and the South West College. She also has a degree in Literature with Creative Writing, achieved through the Open University.
The book concerned, is her first novel ‘Within the Shadows’ which was written almost five years ago. The novel follows the war between vampires and shadow creatures.

“I was informed that the current demographics would enjoy the book and film,” explained Julieanne this week.
“It has all the elements that would make for a positive cinematic experience. Plus, the fact that it is very different from anything else in its genre makes it stand out more,” she added.

At present, the first draft of the screenplay is being written, however, the process between that first draft and could take a long time, years in fact.

“At the moment the first draft of the screenplay is being penned by Mark Roemmich, owner of Noble House Entertainment Pictures, a veteran of film, and who will be the director. Once a screenplay is complete, then the hard work really starts.

“It is all a very long process.”

Julieanne said that she is ‘thrilled’ that her novel could be in a theatre near you.

“Obviously I am excited, but I am also aware that filmmaking is a long, drawn out process, and it will be quite a while (years) before anything truly emerges.

“I am thrilled that I may get to see my characters on the big screen and even more thrilled that my book will receive more exposure, but I am also wary of the pitfalls that can come with such a huge project and am happy to keep my feet firmly on the ground and continue to work on my other novels in the meantime.”

Aside from film escapades, Julieanne noted that she is ‘tying up the last stages of revisions’ on the final book in her Shadow World series, ‘Fighting Shadows’.

She is also to release her first ‘Middlegrade’ novel, on March 8, ‘The Taken’.

And, a further release, ‘Under the Burning Sun’, book three in her ‘Rose Saga’ series is to be released on May 12.

Julieanne is also nearing the end of the first draft of her first crime thriller, ‘Stone Cold’.

For other information and updates you can check out www.julieannelynch.co.uk. 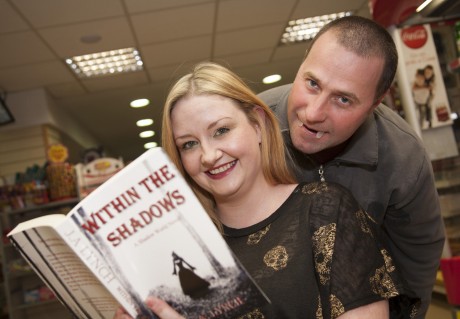 ARE YOU A fan of vampire fiction?