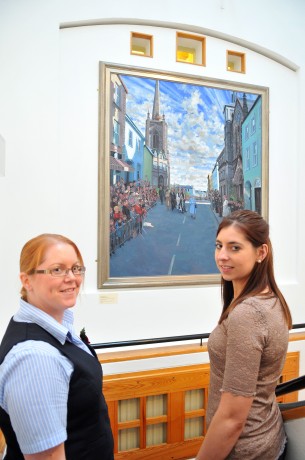 A painting, commissioned by Canon O’Reilly of St Michael’s Church, Enniskillen, to commemorate the visit by Queen Elizabeth II to the town in 2012, has gone on public display at Fermanagh County Museum.

The painting, entitled ‘The Queen’s Visit’, depicts the moment that the Queen crossed the street to visit St. Michael’s Catholic Church after attending a service in St. Macartin’s Church of Ireland Cathedral in Enniskillen on 26 June 2012 as part of her two-day Diamond Jubilee tour of Northern Ireland.

“It was an event of a significance that no photograph could capture and deserved a painting to bring out the inner significance of the moment,” said Canon Peter O’Reilly.

“The street is the focus of the painting because it is the place where the Queen gave a new direction to our common history, while it remains as a place for growth and development.

There is a stillness in the picture itself, which captures the impact of the moment for those who were there. The painting also captures one of the wonderful streetscapes which are characteristic of Enniskillen,” added Canon O’Reilly.

Belfast born artist, Hector McDonnell, was commissioned by Canon O’Reilly to paint the historic moment of the Queen’s visit to the two churches.

“The painting arose because Canon Peter O’Reilly came to see the large exhibition I had in Dublin in October last year and was very moved by some of my large paintings, in particular the ones of Ground Zero, and asked me if I would consider doing something on a similar scale to commemorate the Queen’s visit to Enniskillen last year and her visits to the Church of Ireland Cathedral and the Catholic Church afterwards,” said Hector.

“I was particularly moved by the idea as my mother and an aunt had both been much involved in the Irish School of Ecumenics which had tried to promote Christian understanding and togetherness during the worst of the Troubles in the ‘70s and ‘80s and felt it would be, amongst other things, a subject which would have been particularly dear to their hearts. I therefore came down to Enniskillen shortly after the suggestion was made to me.

“It was a beautiful October day, and as I stood on the street, with the Cathedral on my left and the Catholic Church on my right, the sun was streaking across the street between gaps in the buildings and lighting up those on the left hand side.

“It was a wonderful scene, and I felt so uplifted by that sky and the sun that I could see how to create a painting that could speak of the joy and the hope raised by that visit and by the simple act of going from one church to the other that spoke so much for the emotions of everyone present, and for the wishes and feelings of the community,” he added.