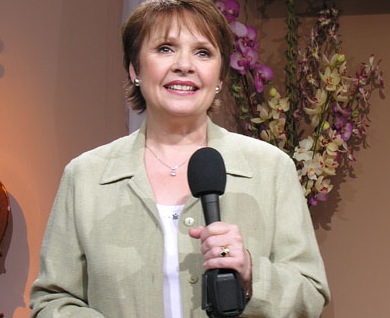 Dana is performing at St Macartin’s Cathedral on Saturday

EUROVISION Song contest winner and former Member of the European Parliament Dana will perform in Enniskillen this week-end, with all proceeds going towards the Cathedral Hall Repair Fund.

‘A Gospel Evening with ‘Dana’ and ‘Live Issue’ takes place this Saturday in St Macartin’s Cathedral, Enniskillen at 7pm.

Dana (Rosemary Scallon) won the Eurovision Song Contest in 1970 and, since then, she has released over 30 singles as a songwriter and performer of Christian music.

Her family links to Fermanagh are though her Irvinestown-born husband, Damian.

Sharing the stage with her are ‘Live Issue’, considered by many to be one of the most popular Country Gospel groups in the British Isles, not only for their musical and singing ability but also for their warmth, humility, sense of humour and love for the Lord.

Although the group still plays at many events in Northern Ireland, they are also regularly found performing at concerts and conventions throughout Britain.

The Who’s Who list of celebs they have shared the stage with is most impressive, acts such as David Frizzell, Joanne Cash, Ricky Skaggs, Charlie Louvin and Jimmy Fortune, from the Statler Brothers, and, to top that, their live performances in Nashville have been broadcast across the world on WSM Radio and Music City Television.

While all five members of ‘Live Issue’ have day jobs, they still find the time to fulfil their musical commitments.
They see their role as a ministry and, therefore any proceeds or expenses the group receive are ploughed straight back into keeping them on the road.

Tickets are also available in Enniskillen –  at the locksmith’s located on the Diamond, at Graham’s Menswear, High Street, and the Horseshoe and Saddlers, Belmore Street.

A donation of £12.50 to the Cathedral Hall repair fund is asked for by way of admission.