THERE are safety concerns over the state of a very busy local road which has begun to crumble away at one side, leaving a sheer drop, as a result of drivers attempting to avoid potholes.
Cllr Sheamus Greene last week shared a shocking video of the Knocks Road in Lisnaskea, which showed the danger facing drivers on the busy local route. Cllr Greene said he had been approached by many locals who were concerned about the road.
“The cause of it is there is so much water lying there all the time, especially if there’s been heavy rain, the road floods across,” he said.
“​Now the road is breaking up, there are two massive potholes on the other side of the road from where that is, which is forcing traffic to almost drive tight against the bollards.”
Cllr Greene said the road had now deteriorated at the side, resulting in a “sheer drop” that was at least four feet.
He said if even temporary measures were put in place to address the issue, it could potentially save someone’s life.
Noting a slew of problems on many local roads, with potholes worse than ever, Cllr Green said he had recently hosted the manager of the Western Division of the Roads Service to the area, and showed him the many issues.
Regarding the Knocks Road, Cllr Greene said the manage said “it possibly could be quite a tricky job” to tackle.
“I think on a temporary basis, there needs to be some sort of work done,” he said. “If that road falls in it will be a complete disaster because it’s that busy of a road. It would cause havoc in the area if it’s allowed to slip more than it is.”
Other roads in the area Cllr Greene has also been highlighting include the Annaghilly Road in Roslea, where he said “you can hardly drive ten yards without a pothole” and the Grogey Road in Coonian.
However, he added: “You could name nearly any road and you’d have no fear there’d be no pothole on it.”
Other local road issues he has contacted the Road Service about include a lack of grit being left out for local communities to keep themselves safe in winter. He noted that while the grit piles were late coming to some rural roads in his area, there were others yet to get their grit boxes filled.
“Where I live, nearly every road needs grit piles, that’s the reality of it. We’re up in the hills,” he said.
“Is saving around 10 roads on grit piles is going to make that much difference to the budget? They could save someone’s life. Locals do use the grit piles, they would go out and spread it.”
Overall, Cllr Greene said he believed Fermanagh was “the forgotten county” when it comes to roads and infrastructure. 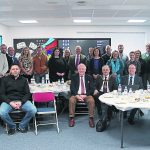