A DAMNING report on Invest NI has been described as being of “no surprise” and “long overdue”.

An independent review, led by Sir Michael Lyons, found the economic development agency as having “profound divisions” at the top.

The report stated that “relationships at senior levels within Invest NI are damaged and are harming the performance of the organisation” and that it needed urgent improvements in leadership, operations and public accountability.

Feedback from Council bodies across the North out with Belfast broad consensus was that the other regions struggle for Invest NI support and are “fighting for scraps”. Other comments included that there was too much focus on Belfast and the wider economy does not see the benefits.

While the report stated that the gap was closer than perceived, it was apparent with Fermanagh & Omagh District Council in relation to Belfast.

Noelle McAloon, of Enniskillen BID (Business Improvement District) stated that the report’s conclusions came as no surprise as it confirmed what many in Fermanagh had long suspected.

She said: “Up until about five years ago, Invest NI’s satellite office in Enniskillen had a staff member in it, one day a week.

“That’s how much value Invest NI put in Fermanagh. I actually don’t think they’ve had anyone on the ground since.

“I’m sure Invest NI will come back and say, ‘we had people on the other end of a phone’, but they really have not been on the ground here for support and encouragement for businesses in the west.

“This report, I think, has been overdue. Its findings are not surprising but yet, they are extremely disappointing.

“Invest NI were telling the business community in the west that they were there, were doing all these great things and they had all these offices in Dubai, Boston and wherever but all of this was just words.

“The business community here knew long, long before anyone else that Invest NI were not delivering for them. This report just confirms that.

“I’ve had so many businesses say to me that Invest NI don’t care or that they don’t support people on the ground.

“Invest NI still has the potential to help people but there definitely needs to be a shake-up there.” 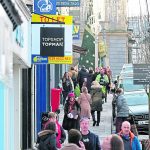