Fermanagh only had four starters from last year’s opening McKenna Cup game with Monaghan but it was only Diarmaid King who was making his Fermanagh debut for Kieran Donnelly’s charges.

Points were at a premium in the first half with Tyrone leading at the break, 0-6 to 0-3. Fermanagh’s points came from Ryan Lyons (free), Garvan Jones and a Diarmaid King free.

Tyrone’s Peter Harte hit three with Cathal McShane adding two point and a single score from Conor Meyler was the sum total for the Red Hands in the opening half. 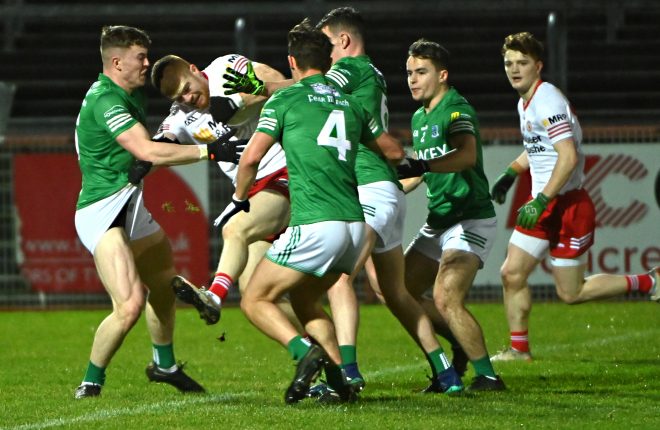 Tyrone’s Cathal McShane is surrounded by the Fermanagh defence.

The home side were much the better in the second half and Conor Cush gave them a four-point lead inside 20 seconds of the restart.

King kept Fermanagh in touch but Tyrone were now moving through the gears and further scores from man of the match Ryan Jones, McShane, Richard Donnelly and Meyler left it 0-11 to 0-4 with ten minutes remaining.

Ronan McCaffrey scored a fabulous point for the Erne men with the outside of his boot and substitute Eoghan McManus did likewise for Kieran Donnelly’s side.

However, Tyrone always held that bit extra of fire power and Dalaigh Jones and Emmett McNabb both pointed.

An Ultan Kelm goal brought some respectability to the scoreline when the Belleek man finished off a flowing move to the net to leave it 0-14 to 1-6.

The four minutes of additional saw a flurry of scores for the Tyrone men. Matthew Donnelly, Emmett McNabb and Niall Sluddenall added points while Fermanagh could only must a Conall Jones pointed free in response.

Fermanagh must now regroup and face Derry this Sunday in St Joseph’s Park, Ederney at 1.30pm. 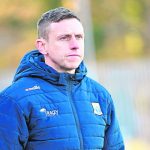