FERMANAGH Fun Farm could be quids in if their bid for a £100,000 grant comes off.

The Lisbellaw-based attraction has made it to the final stage of the Rural Social Enterprise Scheme they could be awarded the giant five-figure sum to expand and grow.

A number of improvements have been earmarked and, if the application is successful, could see a new-look farm by the summer.

While the award is not yet in the bag, Fun Farm manager, Alan Potters, is hopeful that the plans submitted to the panel will be enough to get the cash.

He said: “The grant is available to social enterprises in rural areas. The aim of the grant is to make your business more stable and to bring more employment into the area.

“The process is like a competition. You’ve got a scoring sheet with marks out of a hundred in five different categories. There’s a pot of around £400,000 so say if my application gets top marks, then I would get £100,000 with the rest getting a sum distributed on a sliding scale until the pot runs out.

“We’ve put in an expression of interest and with that we had to provide a shopping list of what we would like to spend the money on – which has since been approved as having met the criteria.

“What we have to do now is to get three separate quotes for all the jobs needing done as well as getting back-up from the community to say that there is a demand for this. You can apply for anything up to £100,000 with a minimum application for £50,000.”

A number of improvements have been highlight by Alan which he states will add to the visitors’ enjoyment of the Fun Farm.

He added: “We have a committee called ‘Friends Of The Farm’ and they laid out an action plan last September which highlighted five areas of what could be done. One of which is to increase the pathways around the farm.

“Another is to provide more paddocks for the animals so that they can spend more time outside than inside. We would also have the paddocks set up with enrichment so the animals can show their natural behaviour.

“We would also want to develop a hatching centre so that in the spring, schools and the local public can see how the hatching process for chicks works.

“The third area of development would be our large barn which is used for housing animals in the winter. But in the spring it is not getting used. So we hope to use the barn in the spring and summer for things like putting on theatre shows or have birds of prey come in.

“The problem with the barn just now is that it was originally designed to be a cow house which meant that gaps in the roof had to be left to let the air circulate and that the gas released from the cows would be able to leave the barn. So the barn would be re-roofed to ensure that it is waterproofed as well as new doors being put on.

“As for the fourth area, we have a new tearoom which has very high steps going into it. We can’t put a ramp there for disabled access as the room is built on a slope and a ramp would be too long and would go into the road. So, we would be looking at putting in an electric lift for people in wheelchairs and also for people carrying child buggies.” 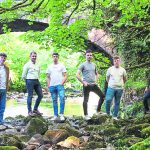