THE decision to close St Mary’s Primary School in Fivemiletown has been blasted as an attack on the rural community.
Plans for the closure came to light after it was revealed by the Education Authority that it had received a request from the Council for Catholic Maintained Schools (CCMS) to “discontinue” the school with effect from August 31, 2023.
This is not the first time the CCMS has tried to close the school. Following a community protest in 2015, the CCMS held off from doing so but warned the decision “would be kept under review”.
It would now appear that the review has come down on the side of closure and Cllr Sheamus Greene insists that this is another example of the rural community being first in line for cuts.
He said: “The closure plan has come back and it seems that small rural schools are now under threat yet again. This decision looks like a lead on with regard to what’s happening in all walks of life where the rural community seems to be under attack.
“We’ve seen it with what’s happening with the SWAH and GP surgeries and even with the Department of Infrastructure’s level of investment into rural areas where we’re virtually getting nothing.
“Rural just seems to be the last on the agenda for everything but it’s always the first on the list for closures.
“The thing with St Mary’s and Fivemiletown, all the pointers are is that the children are getting a really good education there. Education-wise, it doesn’t make sense to close the school down.
“The other big issue regarding St Mary’s is that the Catholic community – who would be a minority with Fivemiletown being a predominantly unionist town – would be left very isolated .
“More so when you consider that it is CCMS who is making this decision. It looks as if they have left the community behind in that area. It’s quite disturbing to be honest.”
Mid-Ulster Councillor, Sharon McAleer, stated that the decision was being made for all the wrong reasons and that the children would suffer greatly as a result of having to travel a greater distance to their new schools.
She added: “The school provides pupils with a first-rate educational experience, has a strong leadership team and a thriving parents and teachers association. It’s also on a sound financial footing and is easily accessible in every sense of the word. Instead of threatening St Mary’s with closure we should be celebrating the achievements of pupils, staff and parents.
“With the nearest CCMS primary schools located more than six miles away, closing St Mary’s would have a negative impact on pupils currently attending the school and those likely to do so in future.
However, the CCMS insist that the closure of St Mary’s will proceed.
A spokeswoman said: “The Council for Catholic Maintained Schools (CCMS) has completed the pre-publication consultation process for the closure of St Mary’s Primary School from August 31, 2023, or as soon as possible thereafter, with staff, governors and parents.” 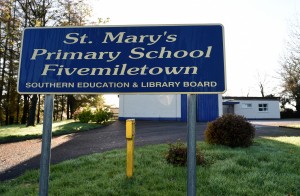 THE CONCERNS of the local community over the future of education at St Mary’s Primary School, Fivemiletown were relayed...