CALLS have been made for “common sense” from both the United Kingdom (UK) government and the European Union (EU) for Fermanagh farmers and vets to have access to animal medicines.
There were fears that the supply of veterinary treatments would be severely restricted to the North following the imposition of hard border in the Irish Sea that resulted from the UK’s negotiated exit from the EU.
However, back in December 2021, a 12-month grace period was agreed upon so that access enjoyed before Brexit would still continue. That grace period comes to an end next month and Fermanagh & South Tyrone MLA, Tom Elliott, has called for veterinary medicines transported from Britain to Northern Ireland to be excluded from the Protocol restrictions.
He said: “The extended grace period for medicines comes to an end next month, at the end of 2022 and so far, the implementation of the full protocol rules would mean that potentially half of all veterinary medicines would no longer be available.
“The potential impact to our agri-food industry is significant to say the least and this should never have been allowed to happen. We have an agri-food industry that is second to none, with excellent markets in Britain, the EU and right across the world which contribute over £500 million to the economy of Northern Ireland.
“This is a very significant issue, not only for animal health and welfare but also for public health, the food supply chain and the Northern Ireland farming community. There is potential for severe repercussions.
“The farming community should continue to have access to the same medicines that are freely available in any other part of the UK, it is vital that our concerns are raised in any negotiations. The EU need to recognise the problems that have been created because of dual regulations.
“The risks are very real and need addressing as a matter of urgency and that is why I have written to HM Government to highlight this inequality and to ask that they do all in their power to resolve this.
“Medicines should never have been included in the Protocol, I am asking for a practical common-sense approach to this issue, a solution that helps protect animal health and food security.”
Fellow Fermanagh & South Tyrone MLA, Deborah Erskine, took to Twitter to invite UK Prime Minister, Rishi Sunak, and invite him to the County to see how the Protocol affects farming.
She later said, “The Protocol is affecting our way of life here in Northern Ireland and separates us from our biggest market – Great Britain.
“I have spoken to farmers who have been unable to get medicines and equipment for their farms. Machinery has had to have special certifications and specifications before it is brought into Northern Ireland, from companies in other parts of the United Kingdom.
“Furthermore, farmers here are subject to different regulations in showing their animals or indeed buying animals, in Great Britain. This has had a major impact on farming livelihoods here. How is that a sustainable way of operating?
“The Government needs to sit up and listen to the concerns of people in Northern Ireland. The must act to deal with the NI Protocol.
“This constituency is one of the most Western constituencies in the whole of the UK be we should not be treated in any way different to that of the rest of the UK or indeed the constituency of Richmond where the Prime Minister represents.” 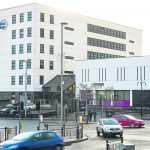 Food Bank swamped as demand rises by 77 per cent