Detectives from the Police Service of Northern Ireland’s Major Investigation Team have acknowledged the sentence handed down today to 32-year-old Joseph Joyce for the murder of John Paul McDonagh in Enniskillen two years ago.
Mr McDonagh, who was 18 years old, died from an injury to his leg, after a verbal exchange escalated to a physical altercation.  This happened in Coolcullen Meadows in Enniskillen on the night of Saturday, April 11, 2020.
At Belfast Crown Court earlier today, Joseph Joyce was sentenced to 10 years imprisonment for murder, five years imprisonment for grievous bodily harm with intent on another man, two years and six months imprisonment for two counts of possessing an offensive weapon and two years imprisonment for affray, all to be served concurrently.
His wife, Ellen Joyce, received a two year custodial sentence suspended for one year for possession of an offensive weapon.
Detective Chief Inspector John Caldwell said: “John Paul was just 18 years old when he was murdered.  He should have had his whole life ahead of him.
“I know that nothing can ease the pain and heartache the McDonagh family continue to feel.
“I can only hope that today’s result sends out a clear message of the consequences of such irreversible and reckless actions.  A young life has been taken; a family left bereft; and another set to spend 10 years in prison.” 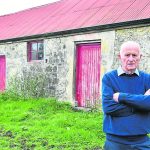