IN OCTOBER 1972 a young priest from Kinawley arrived in the US for what he thought would be three years, optimistic that when he returned The Troubles would be over.
Fifty years on, Fr Sean McManus remains in the States, where he has established himself as a powerful political influence, mixing with some of the top names in the US Houses, and often helping shape Irish-American policy.
Originally from the townland of Clonliff, Fr McManus was one of 12 children from a well-known Fermanagh family. He is a brother of former MP Frank McManus.
Fr McManus moved to America after being reprimanded for causing controversy at his previous posting as a Redemptorist priest in England, including protesting against Catholic oppression and internment in the early 70s.
At the time he had been asked by his superiors to stop speaking out on issues concerning the North, which he said he could not do in good conscience.
“In effect, [my superior] was demanding me to be silent about injustice, while Biblical faith of the Old and New Testament—especially the teaching of Jesus Christ, Himself—and the official teaching of the Catholic Church were insisting that I speak out,” he said.
Fr McManus, pictured left, said this saw him “bound for America.”
Two years after arriving, in February 1974, he founded the Irish National Caucus, now one of the most powerful lobby groups in the States.
Through the Caucus, he has continued to lobby on issues relating to justice in the North, and to call for a united Ireland, often using his own cross-border parish of Kinawley as an example to Americans of how communities in Ireland were divided by partition.
His work includes a campaign for justice for the abuse victims from the Kincora Boys’ Home, and his ‘One Ireland’ petition on change.org, which calls for the country to be united as “one nation, under God” and currently has over 30,000 signatures.
“My American struggle continues for unity, justice, and peace in a new Ireland,” said Fr McManus. “And now 50 years later, I am grateful to God that I’ve been able to do far more in America for justice in Ireland than I would have if I not been exiled by Church and State from England.
“So, God bless America and God save Ireland.” 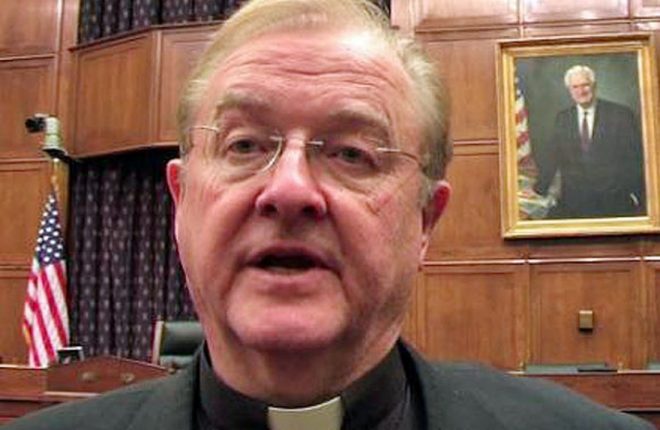 A LOCAL priest celebrating the 50th anniversary of his ordination has told Kinawley parishioners that his heart is never...