FROM being gifted local contraband as a young princess, to making history in the county town as an elderly monarch, the late Queen Elizabeth had a long and colourful history with Fermanagh and its people.
Indeed, her last visit to the lakelands in 2012 will live long in local memory and marked a significant moment not only in the county’s history, but in the history of these islands.
The girl-who-would-be-queen first visited the Fermanagh in 1946, and it was certainly an eventful trip, although not without controversy!
Having met many members of the local community, and wining and dining with local dignitaries, the local RUC force shocked the royal entourage by gifting then Princess Elizabeth locally distilled – and very illegal – poteen. It was gesture that angered many, not least local MP Cahir Healey, and prompted Sir John Gormon to comment years later that it had caused “a frightful row.”
As Queen Elizabeth, she would return to Fermanagh several more times during her long reign, including in 2002 when she visited Ballinamallard, including the children of Little Rascals Playgroup, as part of her Golden Jubilee celebrations.
The Queen’s most significant and memorable visit was to come ten years later, though, when she visited Enniskillen and opened the new South West Acute Hospital in 2012.
It was during that visit she took the short but unprecedented walk across Church Street, from St Macartin’s Cathedral to St Michael’s Church, becoming the first ever British monarch to visit a Catholic church in Ireland.
Such was the significance of the gesture it has been captured for posterity in a stunning painting by Hector McDonnell, which now has pride of place in the County Museum. Even the cornflower blue outfit the Queen wore has become iconic, and was proudly displayed during the Diamond Jubilee celebrations earlier this year at Enniskillen Castle.
In recent days, almost all local tributes to the Queen, and those coming from well beyond the county boundaries, have stressed the importance her Enniskillen dander.
Fermanagh High Sheriff Pat O’Doherty, who on Sunday proclaimed the new king from the same balcony from which Princess Elizabeth address the people of the county in 1946, said it was no coincidence the monarch had chosen Fermanagh to make such a gesture of reconciliation and bridge building.
“I think people here definitely make an effort with people. You get on with life. We’ve so much to be thankful for,” he said.
“OK, we have different cultures, and very strong cultures, in Fermanagh, but we can cohabit and make a life of it, there is space for each other. That’s an important aspect of life here.
“When the Queen did come that visit, and made that walk across to the church, it was itself very significant. It also reflects the woman herself.”
Mr O’Doherty said it also marked an important step in Fermanagh’s history.
“[It showed how] we’re now in peaceful times,” he said. “It was a very relaxed day, actually, and it was a very significant day for Fermanagh.” 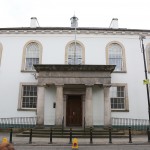