Sitting ninth place, with only four points on the board from a possible 15 and their first league win still eluding them, Ballinamallard’s start to the season has not gone as well as they would have liked.

Manager, Harry McConkey, however, is remaining upbeat. He knows that it is a long season and he is happy overall with his team’s performances in games, bar a few ‘silly errors’ which has cost them victories and maximum points.

“It is a very painful Saturday night when you don’t pick up any points and have contributed everything to the game,” reflected McConkey.
“The main thing is that we don’t get disillusioned and we pull up our sleeves and keep working.

“It is not a nice table to look at but we have been in this stuation before, and we have hung in and got out of here.”

Despite dominating possession and creating numerous goal-scoring chances, Ballinamallard were on the wrong side of a 2-1 home defeat to third-placed Dundela.

The Mallards were dealt a blow before kick-off on Saturday morning when central defender and key player Mark Stafford, as well as attacking players Patrick Ferry and Peter Campbell were all unable to play due to illness.

McConkey was pleased with how his other players stepped up to the challenge and their overall performance against the Duns.

“I thought we approached the game in the right manner and we prepared very hard because we knew that they were going to be a big threat with their results and the new players into their squad,” he said.

“All three of them were outstanding, especially given the fact that they are such a big, physical team.

“I thought the three boys managed them really well.

“I was very pleased with the back three, my wing-backs Ryan Morris and Aaron Arkinson put in good shifts and for quite a spell we dominated midfield and up top we caused them problems all day.”

Ballinamallard travel up to Miltown on Saturday to face fifth-placed Warrenpoint Town. 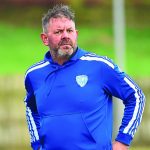 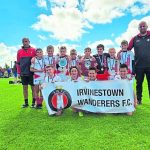 Wanderers beat the Crues to bring home the Shield