Enniskillen-born footballer, Kyle Lafferty, could be banned from playing for his club for 10 games following an alleged sectarian remark.
Lafferty, 35, who plays for Scottish Premier League side Kilmarnock, was excluded from Northern Ireland’s recent Nations League fixtures following the video clip of him making the remark went viral online.
He now faces a Scottish Football Association tribunal on 20 October on the charge that he is accused of not acting in the best interests of football and breaching a rule forbidding the use of insulting language which includes reference to the likes of ethnic origin, race, nationality, religion or belief.
SFA rules state the sanction for the latter is a mandatory minimum 10-match ban which may be reduced “where exceptional circumstances are established”.
Kilmarnock meanwhile released a statement saying that they had dealt with the player internally. The club announced their internal investigation into the incident had been concluded shortly after the SFA charges were announced.
The statement read: “The club can confirm that Kyle regrets his actions and acknowledges that he has let down himself, his family, the club and the supporters.
“Kilmarnock Football Club has subsequently taken internal action, including the serving of a substantial fine.
“The club has also engaged Scotland’s leading anti-sectarian charity, Nil By Mouth, which will work closely with Kyle on a one-to-one basis, in addition to delivering training to our first-team squad and academy squad members, to provide education which the charity believes is key to tackling sectarianism in society.~
“Kyle has also committed to supporting the club’s community projects which will see him participating in Nil by Mouth’s educational initiatives, in addition to serving Kilmarnock’s ‘Football for All’ programmes on a weekly basis for the foreseeable future.”
The club added they would cooperate fully with the SFA’s investigation. 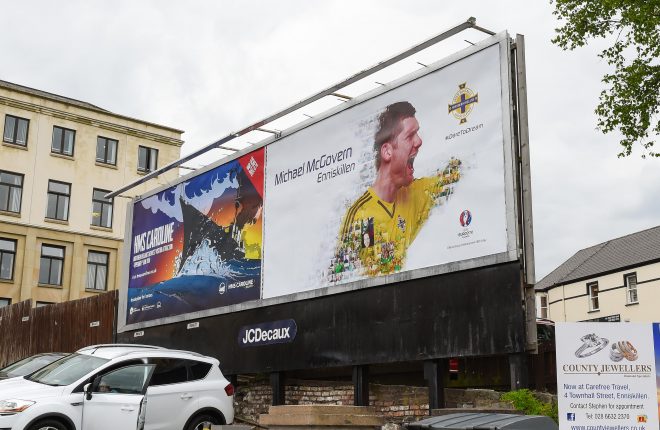 Local lads face Slovakia side ahead of the Euros

NI’s leading goalscorer and keepers all hail from Fermanagh