The ERFC Under 18s girls took on a very strong combined Armagh and Clogher Valley team on Sunday at Mullaghmeen.

The standard was set very high in the first five minutes when superb handling and offloading by the Skins girls sent
Scarlett Keys away wide on the 22 and she finished the opening try under the posts with the conversion added by Victoria Benson.

Armagh replied out wide with a well-worked pick-and-go try but it was not converted.

A midfield scrum was then won by the Skins girls and Chloe Moore broke off the back of the attacking scrum, and broke the gain line,
and off-loaded to the supporting scrum-half Aimee Ross who showed pace to run in the try from the 22 and scored under the posts. Victoria Benson converted again.

Armagh hit back again and scored with their pick-and go working really well but it went unconverted to leave 14-10 at half time.

Armagh/CV started the second half strongly with a tap and charge try from another penalty, under the posts after the first five minutes. This was their only time in front on the scoreline.

ERFC hit straight back after a lung bursting run up the middle and under the posts by Keeva Corry but the conversion was missed this time to leave it 19-17.

The last word was to be in the final minutes when great handling again saw Victoria Benson use her power to score in the corner.

Next Sunday all youth girls teams play Virginia and the first outing for our new senior ladies against Omagh Ladies. 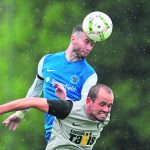 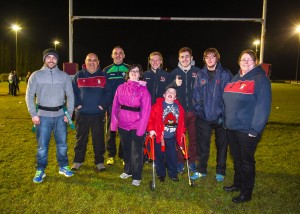 Although the weather tried its best to dampen this very special occasion, the new section of Enniskillen Rugby Club...