LOCAL Fermanagh people joined politicians on Saturday at the Diamond in Enniskillen to show their support for the Noah Donohoe campaign.
Fermanagh and Omagh District Council chairman Barry McElduff of Sinn Féin, Independents, Eamon Keenan and Emmet McAleer, the SDLP’s John Coyle and Adam Gannon, and Donal O’Cofaigh of the Cross Community Labour Alternative spoke at the protest.
Councillor McElduff condemned the PSNI’s application to use a public interest immunity (PII) certificate to withhold information in police files from the inquest into the death of the teenager.
“The PSNI request to use this certificate to conceal the truth, and also the British government’s agreement to use it, was wrong and shameful,” he said.
“We come here today to stand in solidarity with Noah’s family, not least Noah’s mother Fiona, as they battle for truth and justice.
“At the heart of all of this is a mother who has lost her son in the most tragic circumstances. It can be a very lonely road, so it’s only right and proper that we accompany a mother on this journey.
“There are many serious questions to be answered concerning every single aspect of Noah’s disappearance and the subsequent investigation or lack of investigation.
“In terms of the inquest and any other legal proceedings ahead, we all demand transparency if there is to be any credibility. Justice demands this.”
All 40 Fermanagh and Omagh District councillors were contacted by the local campaign group, but DUP, Ulster Unionist Party and Alliance Party members either did not reply to the organisers or told them that they would not be able to take part as they already have prior engagements or are on holiday.
A bigger crowd had been hoped for, but one of the rally organisers Tina McDermott was happy that the issue was getting attention locally, no matter what the turnout was like.
“It’s about getting support from across the community and having more diversity involved because as I’ve said before, it’s not about religion or political allegiances, it’s about helping this family find justice,” she said.
“People will have their own reasons not to attend, but you can’t have an ‘I’m all right, Jack’ mentally about something like this. It could happen to any family and it’s only right that people should make a stand about it.”
Ms McDermott also revealed that a ‘Justice for Noah’ campaign rally will take place in Omagh in a few weeks.
The 14-year-old St Malachy’s College pupil went missing after leaving his home in June 2020 to meet friends at Cave Hill country park in north Belfast.
His naked body was found in a storm drain six days after he disappeared. A post-mortem examination found the teenager died by drowning.
Police stated from the outset that they believe there was no foul play involved in the cause of Noah’s death.
The PSNI has argued that disclosing the information, which includes details on police methodologies and source handling, would damage national security interests.
The inquest into Noah’s death is scheduled to begin on November 28 and will run for three weeks. 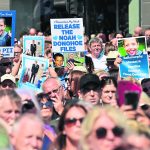 Date is set for Noah Donohoe protest in Enniskillen 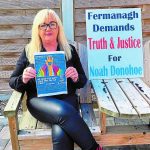