One month after her junior debut, Ellie McCartney made her Swim Ireland senior debut at the 2022 European Championships in Rome.

Competing in three different events, McCartney, who was the youngest member of the team went head-to-head with European, Olympic and Commonwealth medallists.

The Enniskillen swimmer’s highlight came in the 200m breaststroke finishing 24th in Europe. However, the proudest moment was being chosen to be the Ireland team flag bearer at the opening ceremony.

Fans were back in the stands to witness the last major long-course showcase of the swimming season, with 557 swimmers from 46 LEN federations on the starting blocks.

Based in Italy’s capital and the fantastic Foro Italico, it was the first major international event there after the legendary pool complex hosted the 2009 FINA Worlds.

The 17 year-old’s first event was the 100m breaststroke, where McCartney finished fourth in the heat and recorded a time of 1:12.16. It was a great start to her first major international meet.

This was followed two days later with her favoured 200m breaststroke. Swimming in the same heat as teammate and eventual finalist McSharry, she recorded a time of 2:32.38 to finish 24th in Europe.

The National Centre Ulster-based swimmer’s final swim was the 200m individual medley, where McCartney placed 24th overall, knocking almost three seconds off her entry time, to finish on a high and close her first senior international meet in a time of 2:19.70. An excellent result for the first time swimming in an open-air pool – making backcrawl more difficult with no ceiling to follow. 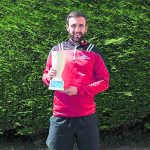