THE continued revival and celebration of the Lough Erne’s long history of cot racing will continue this weekend with the return of the Carrybridge Regatta after a century.
In times gone by cot boat racing was an annual event in Carrybridge, but had died off over the decades. Now, thanks to the efforts of Fermanagh’s ‘West Islanders’ – officially the West Island Cot Heritage Group – it has been revived with a fun-packed nostalgic day planned for this Saturday, August 20th.
With racing starting at 12 noon sharp, spectators are being urged to come along to watch the once-familiar spectacle.
Aside from the regatta itself, there will be displays by the RNLI and the RSPB, traditional music, face painting, and more.
Those going along are encouraged to bring a picnic chair with them to the spectator area at the front of the Carrybridge Hotel, where there will be barbeque to buy.
Adult groups and local businesses are welcome to enter a team into the traditional boat race, and will be provided with practice time, tuition, life jackets and so on. For more information, contact regatta chairman Malcolm Glenn.
Speaking ahead of the return of the historic race, Mr Glenn thanked those who had supported the event and the West Islanders, who formed their group in 2019 to allow local people to gain heritage skills and foster camaraderie in building traditional boats.
The cots they will race on Saturday were built at Belle Isle, not far from Carrybridge.
“Our group built the cots through funding from the Lough Erne Landscape Partnership and Fermanagh and Omagh District Council, using traditional Lough Erne methods and designs and it will be wonderful to see these boats now compete for the first time in the revival regatta, close to where they were constructed,” he said.
The revival of the Carrybridge Regatta is the latest return of a formerly-established but long-lost traditional cot race on the Erne, as part of efforts by local groups and organisation to bring the tradition back in recent years. The efforts have been paying off, with the return of the now well re-established Belleek Regatta last month making a triumphant comeback following the pandemic.
The cot racing revival was started back in 2016 by the enthusiastic Lough Erne Heritage and the late Fred Ternan. Lough Erne Landscape Partnership is now leading the way and supporting the events, providing fund the Carrybridge Regatta along with the ‘Awards for All’ programme by The National Lottery. 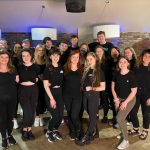