MICHELLE Gildernew has insisted the USA continues to play a vital role in protecting the Good Friday and other agreements.
The US Congress heard evidence last week on the British government’s plan to end all judicial investigations into their actions during the conflict and banning victims from accessing the courts.
Speaking during a visit to Irish American organisations in the US, Sinn Féin MP for Fermanagh and South Tyrone, said: “I would like to thank Representative William Keating and the Congressional subcommittee for all their work on this issue.
“The US continues to play a vital role in protecting our agreements. This stands in stark contrast to the self-serving and unilateral approach of this British Government which believes it is not bound by its own agreements or international law.
“The British government’s proposals on the past are about pulling down the shutters on their role in the conflict.
“They effectively give an amnesty to British soldiers and intelligence agencies involved in the murders of Irish citizens.
“These proposals have been rejected by victims’ groups, the Human Rights Commission, all political parties on the island of Ireland, and the Irish Government.
“The unilateral actions of the British government will undermine the human rights commitments of the Good Friday Agreement.
“They also effectively tear up the existing Stormont House Agreement, agreed by the two governments and the political parties, which agreed a number of mechanisms to deal with the past in a human rights compliant manner.
“These proposals, if enacted, will cause further hardship and suffering to the victims of the conflict, deny truth and justice and further undermine the process of reconciliation.” 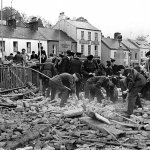 Anger as Legacy Bill passes through House of Commons