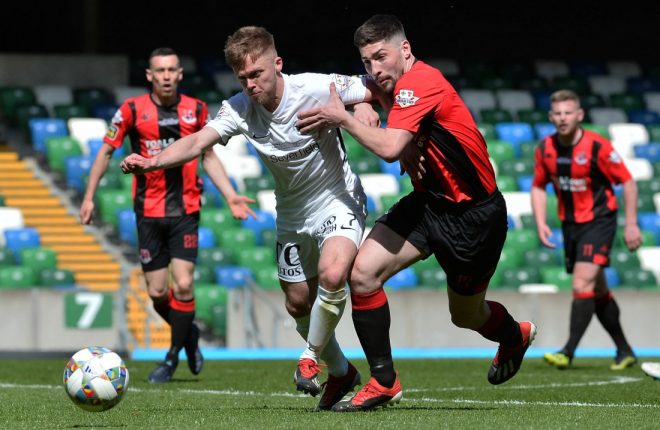 Ballinamallard’s Irish Cup dream was ended in uncompromising fashion by a dominant Crusaders in Windsor Park.

Disaster struck early with a long ball being flighted in from the right wing. Jordan Owens was allowed to meet it almost unopposed and John Connolly could only get fingertips to the ball as Owens’ header looped over him and into the net with six minutes gone.

The Mallards rolled with the punches for the rest of the half though and their luck held to the break as they went in happy to be trailing just 1-0.

Their good fortune didn’t hold very long into the second half though. The Ferney men failed to deal with a corner and Nathan Cashel could only head into the roof of his own net from a Lowry header. It was a harsh blow for Cashel who was far and away Ballinamallard’s best player on the day.

It was all but over on 53 minutes. Ross Clarke was brought in for the yellow carded Cushley and his first involvement was to slam home a pull back from Heatley on the endline to make it 3-0. It was starting to look like a case of how much might Stevie Baxter’s men score.

Credit to Ballinamallard though, they continued to battle away and on 79 minutes they had their best chance of the game. Nathan Cashel sent in a dangerous ball from the left and it hit the base of the upright with Ryan Campbell agonisingly close to deflecting it in.

However Crusaders weren’t to be denied though, and they eased through the closing stages to claim their first Irish Cup title in a decade.