Advertisement
HomeHeadline‘School sports cuts are taking massive toll on health’
Advertisement
CHILDREN’S health is going to suffer as a direct result of cuts to the school sports curriculum.
That’s the message from Fermanagh school principals after the Department of Education last week confirmed it was to cut a £1.3 million programme that employed either an Ulster GAA coach or an IFA soccer coach in primary schools right across the North.
St Ronan’s PS in Lisnaskea is to lose its GAA coach, Eimear Keenan, as a result of the cuts.
She will be one of more than 50 coaches across the North to lose their jobs under the move
The school’s principal, Brian McGrath, said this won’t just have an impact on the lives of those who will be losing their job but on the health of the children they coach.
“In a time when we are promoting healthy eating and living, the programme was an essential contributor to this school and indeed many schools,” said Mr McGrath, who pleaded with the Department to reverse its decision.
While the scheme being scrapped was only in place in primary schools, post-primary schools are also fearing the impact of losing it.
Principal of St Michael’s College, Mark Henry, said their PE teachers had noticed a marked decline in fitness tests over the past 10 years.
“We’re seeing increasingly boys coming to the school with fitness levels at a lot lower than they used to be,” he said.  “So this is incredibly short sighted.”
John Quinn, head of youth at Ballinamallard FC, said that the cuts were unfair on children in rural areas particularly, where there aren’t as many opportunities as in Belfast.
And he added that scrapping the programme would have a detrimental affect on developing gassroots talent.
“We have found when the young players have received this coaching in the schools it has whetted their appetite to get involved,” he said.
“We take them in from primary school age but we can only do one session with them at the club on Saturday mornings, so this coaching in the school helps our young players to be better prepared when they come to us.” 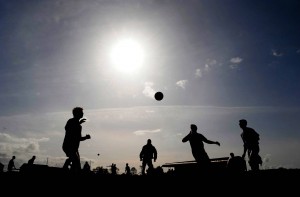 Teemore men were right to bring about ‘Apocalypse Now’

The coach from the Ulster Council was ashen faced. Bodies were splayed across the gym floor of St Michael’s...