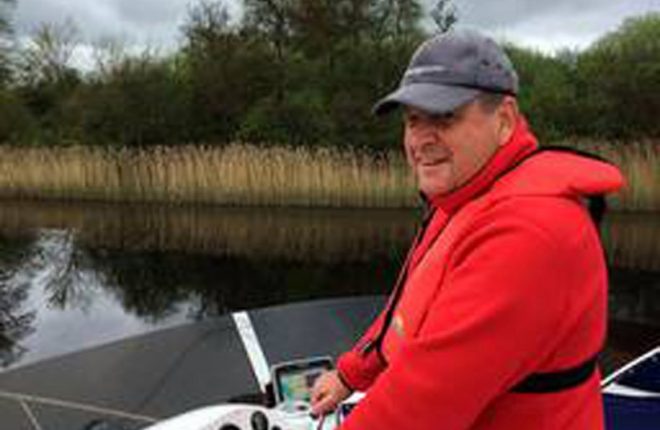 A CORORNER has supported calls for the mandatory wearing of life-jackets on waterways at an inquest of a man who drowned in Lough Erne in tragic circumstances.
Joe McCrisscan was speaking at the inquest into the death of Michael James Beattie (55) who died after falling from his yacht which was moored at Lough Erne, in sub-zero temperatures.
Mr Beattie was a highly experienced sailor, originally from Dungannon but living in County Down, and one of the few members of Lough Erne Yacht Club who used his vessel in the winter months.
He was a retired police officer working as a company director, and had held the post of Commodore in the yacht club several times.
His body was recovered from freezing water on December 12 2017, by the RNLI after he was reporting missing.
CCTV footage showed Mr Beattie after he entered the water, swimming toward a landbank. He manged to get out but was noted sitting for over an hour, rocking to and fro. At some point he slipped back into the water and became submerged.
The inquest heard from Mr Beattie’s fiend, Jimmy Dundas, whose barge was moored nearby.
He explained Mr Beattie – a friend of over 30 years – arrived at his barge about 10.30pm the previous night.
Mr Dundas gave Mr Beattie a gin and tonic and noted he had alcohol consumed prior to arriving. They talked for a while discussing plans to travel to a boat show in the New Year.
Mr Beattie left around 11.30pm to return to his yacht.
Mr Dundas said, “My dog followed him that night. I couldn’t understand where it was for a while and then it came back. I knew nothing more until I was told Mr Beattie’s partner had tried to contact him and couldn’t.”
He reported his friend missing, and PSNI and RNLI personnel commenced a search. A shoe had been found washed up on the shoreline.
A police officer, who is also a RNLI volunteer, told the inquest he recovered Mr Beattie’s body slightly under a jetty, just a short distance from where he re-entered the water. He was identified at the scene by Mr Dundas.
The police officer/RNLI volunteer said the water was extremely cold and it was likely Mr Beattie had “gasped” causing him to inhale water and hypothermia would have been a factor.
He said, “The advice to avoid cold water shock is not to fight the water or try to swim, but to float. This will save energy, allow the body time to adjust and allow rational decision-making.”
In added, “It is important to say, in the Republic of Ireland, to my knowledge, it is compulsory to wear a life-jacket. That is not in practice here and it should be.”
The assistant pathologist Dr Christopher Johnston carried out a post-mortem on Mr Beattie and determined death was caused by drowning due to immersion in water.
However, having heard the evidence the coroner, whilst making this the primary finding of Mr Beattie’s death, also recorded hypothermia as a contributor.
He said, “This gentleman was a keen and highly experienced sailor. But it is crucial persons in these situations appreciate the dangers posed by waterways and freezing conditions. County Fermanagh has the most tranquil and beautiful waterways, but they are also immensely risky.”
He added, “I echo the call for floatation devices to be compulsory.”
Mr McCrisscan concluded by expressing his condolences to Mr Beattie’s family and friends, and thanked the PSNI and RNLI for their actions at the scene and at all times throughout the year.