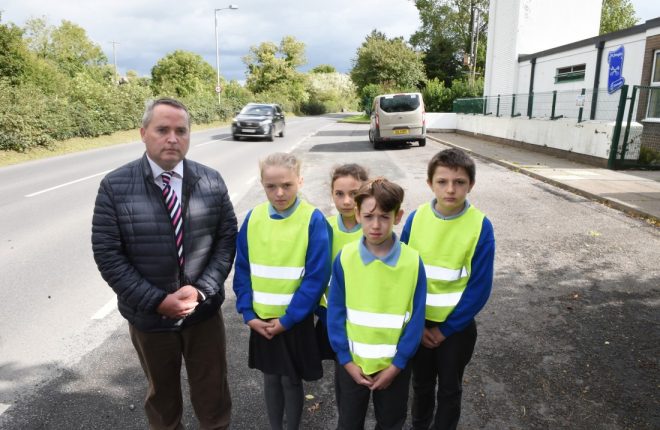 WHILE a pilot scheme to reduce speed limits outside primary school is being trialled in other parts of the North, no Fermanagh schools have been included in the exercise aimed at improving road safety for youngsters.
The principal of St Mary’s Primary School in Maguiresbridge, John Prunty, has warned that a 20mph speed limit is needed where pupils are being dropped off and collected close to busy main roads.
The pilot scheme sees new part-time speed limits of 20 miles per hour being introduced outside seven rural primary schools across the North. This will be for a distance of 400-500 metres along adjacent roads in the vicinity of each school and will be enforceable by the PSNI.
St Mary’s is on a busy road that has been identified as a hot-spot for speeding drivers. In March a joint initiative involving pupils from the school and the PSNI caught 12 motorists driving in excess of the 30mph limit past the school in just a two hour period.
The drivers were given the choice of a speeding ticket or being grilled by a panel of ‘judges’ made up of schoolchildren. Ten of the red-faced speedsters chose to face the questions from the schoolchildren while a a driver refused and another driver received an on-the-spot fine as he had been travelling at over 40mph.
Mr Prunty stated that he will “welcome anything that helps keep children safe. .”
However he believes that motorists need to be made aware of the speed limit at the school and how fast they have been travelling.
He explained: “It would be a great initiative to bring a speed awareness to road users to prepare them for the reduction of the limit outside the school.
“There are huge boards in areas which show the speed that a vehicle as it approaches. It would better prepare motorists for the speed reduction rather than just suddenly put up signs for 20mph.”
Echoing these sentiments, Michael Grew who is principal of St Joseph’s Primary School in Donagh, said: “Pupil road safety is of paramount importance.
“We are fortunate to have a lollipop lady who crosses the pupils safely both in the morning and evening but the speed of cars and lorries passing the school is a concern.
“Although we deliver road safety programmes within the school, it is vital for all agencies such as the DOE, DENI and PSNI to combine their efforts to ensure school crossings points are places where our pupils feel safe. This could involve introducing speed ramps outside our school premises.”