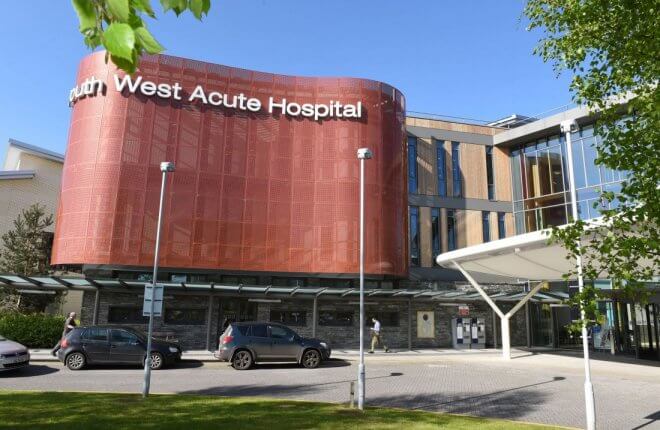 AMID growing fears over the future of services at South West Acute Hospital, it has been revealed that the Western Trust is spending £27 million per year on locum staff, amounting to over £2 million per month.
The Western Trust is relying on the use of temporary doctors, health professionals, nurses and admin staff costing £27 million during the 2017/18 financial year, a fee that has doubled from £13m in 2015/16.
The Western Trust’s most recent annual report detailed the spend stating,
“The clinical and financial burden of locum posts in the Western HSCT continues to rise. The cost of medical locums for year 2017/18 was £27 million.”
Last week the Herald reported that Western Trust chief executive, Dr Anne Kilgallen announced radical plans for the future development of health and care services across Fermanagh, while previously the Trust reported that they were experiencing staffing shortages.
The annual report also claims that the Trust has undertaken a successful international recruitment programme which to date has attracted and retained 35 doctors, with the majority being placed in the SWAH.
However, it now appears that many of the new recruits are still on an initial first year locum contract and that the Trust ‘hopes that the majority will progress to permanent employment.’
MLA Rosemary Barton believes that the dependency on locums is ‘yet another example of the deepening workforce crisis engulfing the Western Health Trust.’
“The figures confirm that the Western Health Trust has become almost dependent on astronomically expensive locum staff just to hold together essential services.
These prices are quickly becoming an intolerable strain on the already limited resources of the local health service.
The fact that the cost of locums has more than doubled is especially shocking given waiting times have become drastically worse over the last couple of years. I’m repeatedly told a lack of finances is the key contributory factor to the current waiting times yet the Trust can still find all this cash to pay huge sums for locum staff.”
Fermanagh Save our Services spokesman Donal O’Coffaigh is concerned about the ‘sustainability’ of the temporary staff.
“It is concerning that the local health Trust has not put in place a more permanent arrangement and is left reliant in Locums and other temporary staff which can be more expensive. There are obviously questions marks over this going forward and we need to see commitment to permanent positions in the local hospital.”