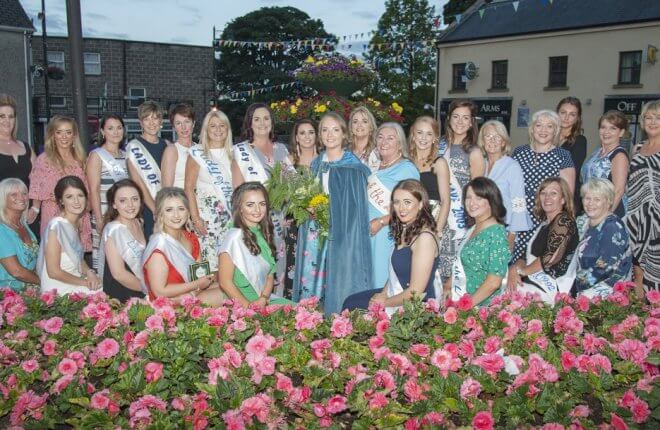 Many of the Ladies of The Lake from this last 40 years with newly unveiled Lady, Tara Hall and first ever Lady, Catherine Lawn

LOCAL girl Tara Hall gave her mother a shock when she was proudly crowned the 40th Lady of the Lake at the annual festival.
Irvinestown native Tara found out a week before the Festival that she was to be cloaked as the new Lady of the Lake, but managed to keep it a secret from her mother, Tanya.
The 19-year-old is currently studying geology in Aberdeen and has just completed her first year at University and while at home for the summer she is working in Donna’s Hair Studio.
Speaking to the Herald, she explained: “The opening night was brilliant and the atmosphere was great.
“My mammy did not know that I had been chosen as the Lady of the Lake because the only person I told was my daddy. She couldn’t believe it and it was such a good surprise for her.”
So far, Tara has attended many events including the Donkey Derby, a service on White Island, the Bonny Baby competition and the popular pet show at the Bawnacre.
This year marked the 40th anniversary of the Festival, and on the opening night, a reunion of previous ladies who have held the title was held before Tara was crowned.
The student is now fully embracing her new role and was delighted to be joined on stage by the majority of women who were previously rewarded the cloak.
“It was really nice to see everyone who had been the Lady of the Lake there.
“I think it was less nerve-racking to have them all on stage with me but I knew once I was up there that was it, and I had to get on with it.
People have been so supportive, coming up and congratulating me. It has been nice to be out and about talking to people.” said Tara.
With still a couple of days of the festival to go, Tara has a diary full of events that she will attend in her new title.
“I have already done so much but I am now really looking forward to the fair day on Wednesday and then the truck festival on Sunday. They are both really good events, and the festival is great for the town,” concluded Tara.