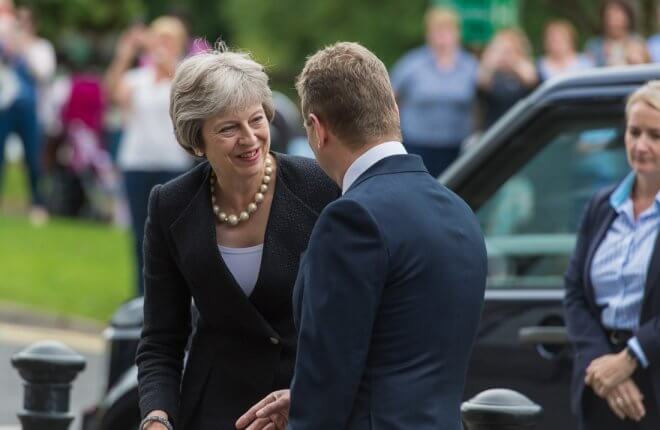 BRITISH Prime Minister Theresa May’s visit to Belleek, was described as a “box ticking exercise” that will make no difference to the outcome of Brexit, by a local County Fermanagh businesswoman.
Chairman of Belleek Chamber of Commerce Bridie Gormley, who was a guest at the historic visit to Belleek Pottery, said a hard border would be a “tragedy” for the area.
Speaking after the Theresa May visit, Mrs Gormley said: “Obviously we are opposed to a hard border.
“It would be detrimental to tourism, our village, our Donegal hinterland, if will affect farming and every aspect and Brexit is going to be a tragedy if it happens for us”.
“The border regions of Northern Ireland has benefited greatly from EU funding for infrastructure and it will be detrimental to us all”.
And when asked if Theresa May’s visit would make any difference, Ms Gormley said that it might be “symbolic but I think it is just another box ticking exercise”.
She added: “I don’t think we are in for a hard border but I don’t think that Theresa May visiting Belleek will have any real impact either way.”
Security was tight as Mrs May paid a visit to Belleek Pottery in the Fermanagh/Donegal village of Belleek on Thursday evening.
Around 5.30 pm, in brilliant sunshine, a sweeping cavalcade of nine police motorbikes swooped down the Main Street, a street that was built wide in Plantation times so that cannon could be mounted to repel invaders.
They turned sharply into the entrance of the historic pottery.
Mrs May, who was wearing a black dress and leopard print shoes stepped out of her car where she was greeted by Pottery Managing Director John Maguire and former First Minister Arlene Foster who arrived at the Pottery ten minutes before the Prime Minister.
Secretary of State Karen Bradley arrived five minutes after the Prime Minister. A woman in the crowd shouted “Any progress” as the Prime Minister began a tour of the Pottery where she was meeting around a dozen local businesses.
She left the Pottery after a 40 minute meeting with local business people and went on to a private dinner after spending an hour and three quarters in the Pottery. There was muted applause as the Prime Minister’s helicopter departed Belleek later in the evening.