Advertisement
HomeHeadlineTowns and villages across county show their colours!
Advertisement 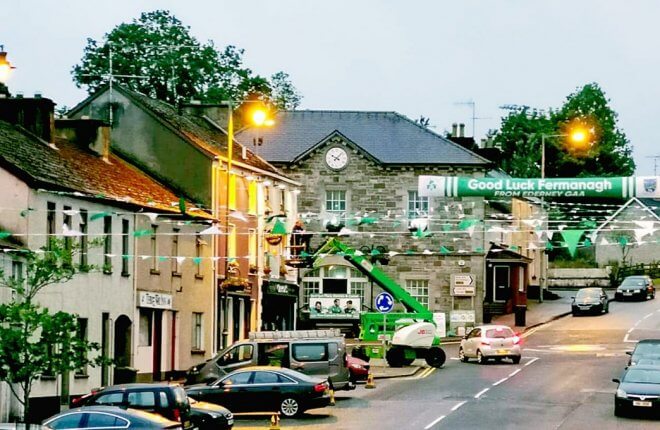 Ederney is awash with colour as it gets ready to cheer the Fermanagh players on Sunday.

WITH just days to go until the Ulster Final, excitement is really starting to build across Fermanagh with cherrypickers and ladders out in force as people work late into the night to decorate their towns and villages in green and white.
Bunting and flags have become a familiar sight as the Erne colours adorn lamposts and telegraph poles from Ederney to Lisnaskea and Roslea. Those travelling to Clones on Sunday to cheer on Rory Gallagher’s men preparing to do battle with Donegal will certainly not be disapponited by the efforts of our hardy supporters.
Homes and businesses have also been busy erecting signs to spur on the team towards victory in the hope that the Anglo Celt will paying them a visit very soon!
While Enniskillen was notably absent of green and white earlier this week, Fermanagh’s second largest town Lisnaskea has certainly got into the pre-match spirit to wish good luck to local lad Tomas Clarke and his fellow players. And the rural area of Coa, home to team captain Eoin Donnelly, showed that lack of numbers can be made up for through sheer community effort with a long stretch of road plastered with flags and buntings.
Ederney is among the most colourful spots as villagers get behind their talented trio Paul and Declan McCusker and Conor McGee and they are being urged to get a flag outside their house before Sunday. 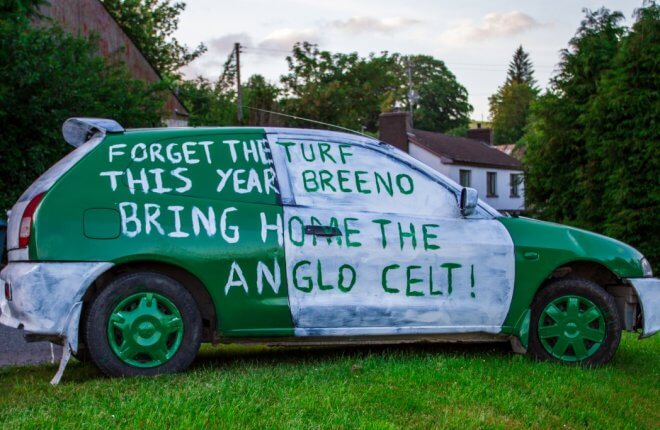 Getting the message across on this car in Tempo

Tempo is decked out in the Erne colours too to cheer on Tempo Maguires duo Aidan Breen and Lorcan McStravick with an old car sprayed in bright green and white at the road into the village. Club chairman Sean Murphy is certainly proud of their efforts.
“I think it is no understatement to say that ours is one of the best decked-out towns in the county. This is down to the vision and energy of the volunteers involved and their commitment in showing that Tempo is a village that pulses with the heartbeat of Fear Manach football and our pride in the green and white,” he said this week.
Club volunteers at Newtownbutler First Fermanaghs have also been busy putting up the bunting in their town, which is equally looking great. Over in Derrylin and Maguiresbridge, locals are keeping everything crossed that the Anglo Celt will be paraded through their towns come Sunday evening.
Meanwhile as part of the pre-match build-up, pupils and staff at schools across the county are being encouraged to take part in ‘Wear the Fermanagh Colours Day’ this coming Friday by sporting their green and white with pride.