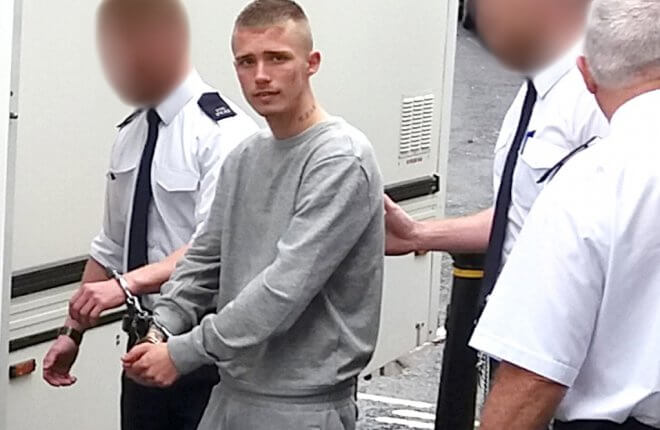 A HIGHLY violent male prisoner who fled up through Enniskillen town centre in handcuffs last summer when he escaped from police custody has been jailed for four months.
Connor Floyd (20) from Main Street in Maguiresbridge and Killen Park in Killen, made off from a police patrol car as he was being transported from Omagh to Enniskillen Magistrates Court for a bail hearing on August 7th last. The incident led to him being pursued by police on foot and in patrol cars through the town centre.
The court proceedings were delayed by almost half an hour while the incident was ongoing.
Further violent scenes erupted in the courthouse cells where Floyd was being held following his capture when he threw a hot cup of tea at a female police constable as she was dealing with another defendant.
Floyd had been arrested in Omagh that weekend following a complaint from his partner of his alleged involvement in an incident in Dromore. As he was being led away from the courtroom after being refused bail, Floyd became physically and verbally abusive towards court and security staff.
Floyd was charged with assaulting and obstructing police and assault on a custody officer.
Appearing in court last Wednesday from Hydebank Prison where is in custody on other matters, Floyd also faced charges of a further charge of assaulting a police constable on 17th June last.
The court heard that on this occasion, police were called to Abbey Drive and while Floyd was being searched for suspected drugs he became aggressive and violent, striking the policeman in the chest.
Defence barrister Steffan Rafferty told the court that his client had taken issue with police on this occasion as no offence had been committed. In relation to the later events at Enniskillen courthouse, Mr Rafferty said Floyd has been behaving very erratically that day.
“In my dealings with him, I could tell that all was not right. His behaviour was inexcusable when he lashed out and this was due to his frustrations at the events the previous weekend,” he added.
District Judge Michael Ranaghan noted that Floyd had 27 previous convictions for assault.
“Regardless of your views, police are public servants who have a job to do and the right to be protected by the courts. I can’t ignore your record and keep you out of custody and I’m not going to. This behaviour towards police has to stop” the judge added.