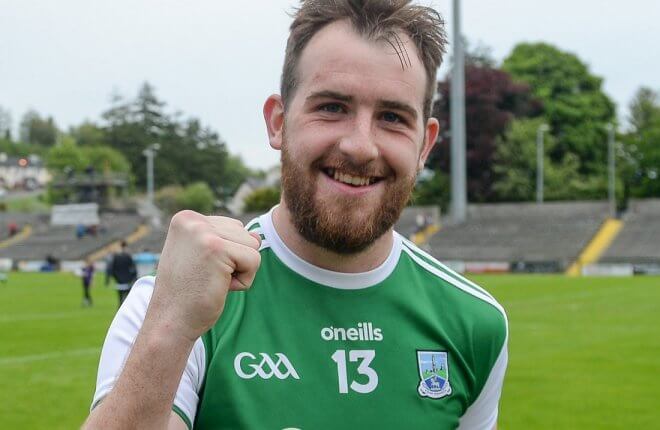 Fermanagh’s Sean Quigley, above, and brother Seamus will be key men on Sunday

AS Fermanagh aim to make history in Clones on Sunday by claiming their first senior Ulster title, family will play a huge factor as the team looks to clinch victory.
Rory Gallagher’s team taking on Donegal boasts no fewer than five sets of brothers who will be lining out in historic appearances of their own.
Lee Cullen and his twin brother Che from Belnaleck, Derrygonnelly duo Ryan and Conall Jones, Quigley brothers Seamus and Sean from Roslea, the boys from Ederney Declan and Paul McCusker and Kinawley’s finest Tomás and Ruairi Corrigan are all hoping to bring the Anglo Celt back to the Erne county this weekend.
Full-forward Conall Jones says that to be at Clones on Sunday alongside midfielder Ryan will be a special occasion for his family.
“To reach an Ulster final is exciting, not many Fermanagh players have had the opportunity to play in one. To be there with my brother is very special. Mum and Dad are certainly very proud of our achievements to date.”
When quizzed on who is the better footballer, Conall replied: “I think Ryan is to be honest. He is playing the best he has been in a while this year and when you need him most he will deliver and thankfully he has this year so far.”
For half-forward Declan McCusker while it’s amazing to have reached an Ulster final for everyone on the squad, doing so with his brother Paul is an added bonus.
“I suppose having a brother on the panel makes it a bit more special because we grew up playing football together and it’s something we have always wanted to do. We are both pretty competitive and want to be successful in anything we get involved in.”
When asked what are Paul’s best attributes to the game, Declan replied: “He is very fit and his work rate is serious. He has very good feet as well but he doesn’t get enough shots away at county level.”
Forward Tomas Corrigan says it’s a very nice feeling reaching the final with Ruairi alongside the rest of the players and management team.
“We have all worked extremely hard this year and it’s very satisfying that our work has paid off so far. Ruairi and I are both equally as competitive which has led to many a row in our house as I’m sure our mum would attest to.”