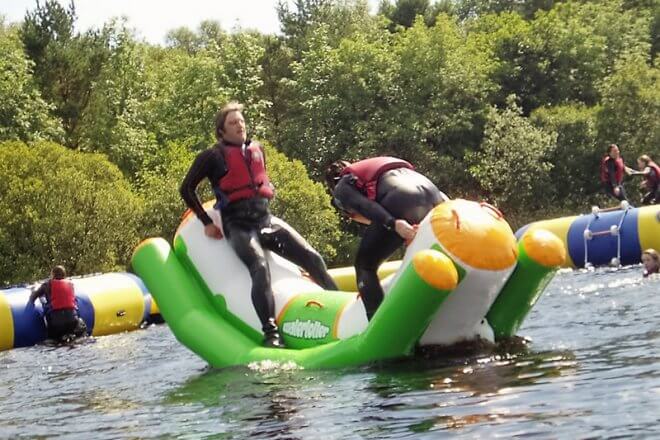 Having fun at the Correlea Activity Centre’s waterpark

WHEN you hear of outdoor waterparks, your mind probably conjures thoughts of sunnier climes like Florida, not Fermanagh.
By the end of this summer, though, we will have a total of three outdoor waterparks either within the county or within easy striking distance. There has already been one a small one at Corralea Activity Centre in Belcoo, the Share Centre in Lisnaskea is due to get one in the coming weeks, and hope to have it up and running by mid-July, and the creation of a particularly large one is under way at Lough Allen in Leitrim.
Marius Leonard from Corralea said they had their waterpark for 12 years now. It began with just one water trampoline and has grown to include slides, trampolines, catapults and much more. It’s on the water for four months a year and, unsurprisingly, it’s particularly popular during fine weather like we’ve been having recently.
Mr Leonard said they were one of the first waterparks of its kind in Ireland, and no doubt inspired others. “I’m surprised people didn’t catch on to it a lot earlier. A lot of people like the idea. It’s a great activity,” he said. “It gets kids into the water, and gets them familiarised with the water in a fun situation.”
As for the Irish weather, Mr Leonard said: “It’s OK if it rains, that’s fine, but windy weather is not ideal. Hector blew all our trampolines off the water. And with our changing climates we don’t know when the next hurricane is going to come in. You don’t have that problem in Spain or France.”
Down in Leitrim at the soon-to-be opened Blueway Waterpark, they’re not too worried about the weather, as the massive 30m by 30m assault-course style park will be located on a sheltered area of Lough Allen.
“I don’t think the weather will put people off. They’re gong to get wet anyway when they go,” said Kenny Murtagh, who is undertaking the venture along with fellow county men Tom Cornin and Liam McCaulliffe .
The park will be located beside the Lough Allen Hotel in Drumshanbo, and should be open before the end of July.