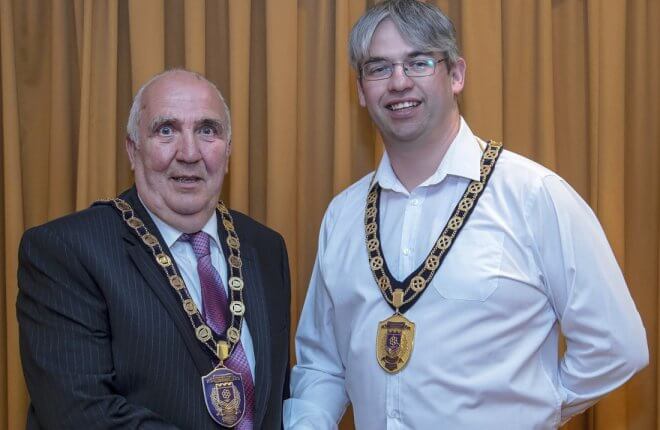 NEWLY appointed council chairman Howard Thornton has vowed to be “as fair and impartial both inside and outside the Council Chamber as is humanly possible.”
The UUP man was selected as the new chairman for 2018/19 at Monday night’s council AGM in Omagh. Sinn Fein Councillor John Feely from Belleek was elected vice-chair.
Councillor Thornton, an Ulster Unionist representative for the Enniskillen District Electoral Area, was nominated by outgoing vice-chairman Cllr Alex Baird and takes over from Sinn Fein’s Stephen McCann.
The former policeman was elected to the council in 2014 and has familial connections in politics as both his great uncle William and William’s son, Dick, served as Chairmen of Enniskillen Rural District Council while Dick also served a term as Chairman of Fermanagh District Council.
“One of Dick’s claims to fame was hosting one of my childhood heroes – Willy John McBride to open the Lakeland Forum in 1976,” the ex-Portora student said this week.
Mr Thornton added: “It is not only a great honour for me, but the greater family circle for me to attain such a privilege and opportunity. Whilst I have referred to the honour bestowed upon me I must also accept the responsibility that accompanies such high office. I do not take that lightly.
“I will endeavour to be as fair and impartial both inside and outside the Council Chamber as is humanly possible. I am fully aware that the office holder represents all constituents and all communities.”
The new first citizen says he is “fully aware that the office holder represents all constituents and all communities”.
He says that one of his biggest challenges over the coming year will be Brexit: “As a border Council area we are walking into the unknown but whatever is decided will have an impact on all living within our area. As a Council we will have to navigate our way through the implications of Brexit as they unfold. I have no doubt that this will not be an easy task for our communities, businesses and council itself.”
Meanwhile the outgoing council chairman came under fire again this week over his refusal to condemn the 1987 Enniskillen bomb.
The row initially erupted last July following comments made by Trillick Sinn Fein councillor Stephen McCann, in which he refused to condemn the Remembrance Day bomb ahead of the 30th anniversary and praised IRA man Seamus McElwaine.
UUP Cllr Victor Warrington told Monday’s AGM: “It saddened me when during your year in office you refused to condemn the Enniskillen Remembrance Day bomb, an act of devastation to individuals, families and the community.
“Your praise for the IRA terrorist Seamus McElwaine also caused great hurt and distress to many families in this Council area.
“Your comments certainly did not reflect the principle of public duty, did not promote good relations and offered no respect to the innocent victims who have suffered at the hands of terrorists,” Mr Warrington added.