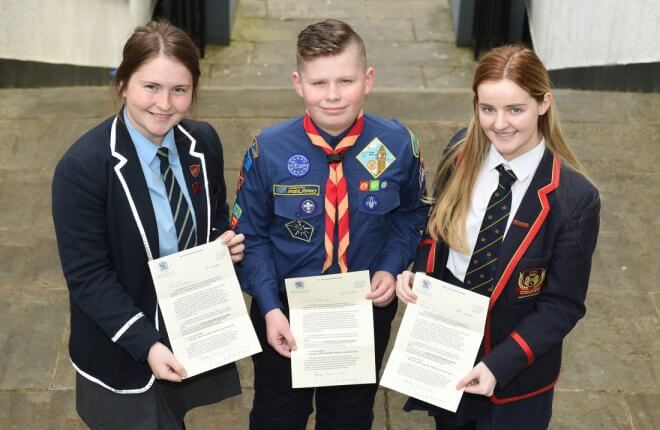 Lorna McHugh from Ballinamallard, Adam Smith from Enniskillen and Jayne Monaghan from Tempo are excited to be invited to Harry and Meghan’s wedding on 19th May. Photo: Andrew Paton

THREE students from Co Fermanagh have been included on the guest list for the wedding of Prince Harry and his American actress fiancee Meghan Markle later this month.
Lorna McHugh (16) from Ballinamallard, Jayne Monaghan (18) from Tempo and 12-year-old Adam Smith from Enniskillen will be among those in the grounds of Windsor Castle on Saturday, May 19th for the nuptials of the British royal couple in St George’s Chapel.
All three will be accompanied by one of their parents and intend to make a weekend of it by enjoying a trip around London afterwards.
In March, Prince Harry and Ms. Markle said they wanted members of the public to feel part of their celebrations too.
They requested that 1,200 people be chosen from a broad range of backgrounds and ages, including young people who have shown strong leadership and those who have served their communities.
The local trio were nominated by the Lord Lieutenant of Co. Fermanagh, Viscount Brookeborough.
Jayne, who attends Enniskillen Royal Grammar School, got the nod due to her involvement with the Youth Council for Northern Ireland.
She told the Herald: “I think my mum Sandra is more excited about going than me even though I keep reminding her that she won’t actually be inside the church.
“Hopefully we will see enough of the day to make it one to remember for many years to come. It is very nice to have been asked to attend although I still have to find a dress!”
For Erne Integrated College pupil Adam, his outfit is already taken care of. He will be proudly dressed in the uniform of the scouts and accompanied by his father Tony, a prominent figure in scouting in Fermanagh. Adam had to wait a whole day to break the news to his parents, who were on holiday when that all important letter arrived.
“It took a while to sink in but now I feel very proud,” he added.
Devenish College student Lorna and her mum Jennifer also have their outfits for the big day already chosen. Lorna was nominated in recognition of her charitable and voluntary work, which includes coaching at Ballinamallard United FC and as a Sunday School teacher.
“When I rang my mum to tell her she told me to ‘wise up’ and thought I was lying. It took a while to convince her it was true.
“Everyone else laughed when I first told them I had been invited but now they are all very happy and perhaps even a little jealous.”

Jump in number of people infected in county

Property market ‘holding up’ as people look to future